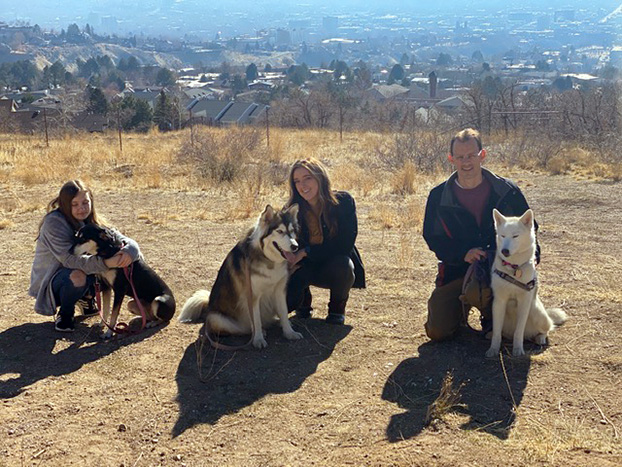 Addison, Angela and Shawn Gantkowski crouch next to their dogs, Jasmine, Gracie and Jade. Photo submitted.

KANNAPOLIS — Months after quitting his longtime job at a car dealership in Winston-Salem, Shawn Gantkowski hopped into his pickup truck with his wife, Sharon, and headed west.

After spending most of his life working in the automotive industry, the COVID-19 pandemic forced Gantkowski to reconsider what was important in his life.

“I asked myself a pretty simple question: If this was the last week of my life, would I be doing this?” said Gantkowski, who has lived in Kannapolis for almost two decades. “The answer was no and I realized if I continued to this I’d be lying to myself.”

“We found ourselves going to the local parks more and the lake and just enjoying a day with our dogs,” Gantkowski said. “The more I started doing that, the more I realized I really wanted to do something that incorporated the whole family, not only my two daughters and my wife, but also our three dogs.”

He started researching canine-related businesses and eventually stumbled across Dog Training Elite, a national dog training program that has franchises throughout the country. The focus of Dog Training Elite’s program, Gantkowski said, is teaching dog owners the skills needed for them to train their own companions. It also is oriented around positive reinforcement and includes Pavlovian principles.

The Dog Training Elite headquarters, where the company educates its trainers, is located near Salt Lake City. That’s where Gantkowski was headed with wife and their three dogs last November.

After a roughly 35-hour car ride across the southeastern United States, Gantkowski and his wife arrived in Utah with little knowledge of dog training. The Gantkowskis were soon practicing the training techniques they were learning on their own dogs. 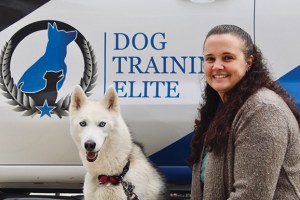 Sharon Gantkowski poses with Jade, one of the family’s three dogs and part of the reason why they launched a dog training business during the pandemic. Photo submitted.

Their two daughters, Angela and Addison, flew out separately to join them for training sessions.

Angela, who graduated from Appalachian State in December with a degree in marketing, has since joined her family’s business as a trainer and social media manager. As a competitive drag racer for 11 years of her life, Angela expected to work in the motorsports industry after graduating.

Like her family, she changed paths and hasn’t looked back.

“It’s brought us all closer together and I think it’s been good for us,” Angela said.

Addison, who is younger, pitches in as well.

The sudden shift in career and focus for Gantkowski and his family wasn’t without its challenges.

On the way back from a training session in Utah, Gantkowski and his wife got into a car accident on a rural stretch of interstate in Wyoming during a snowstorm. The wreck kept them marooned in a hotel for a weekend before they could get back on the road. For the rest of the trip home, Sharon felt unwell.

“We started heading home at 9 o’clock Monday morning and we get home Tuesday at 11:30 at night,” Gantkowski said. “My wife gets in the house and goes, ‘Something isn’t right. I need to go to the hospital.'”

Sharon was suffering from severe blood clots catalyzed by COVID-19. She spent the next few days in the hospital.

“We went from a terrible car wreck, where we’re very fortunate no one got hurt, to 72 hours later my wife is in the emergency room with bad blot clots from COVID,” Gantkowski said. “Most people don’t experience what we’ve done in a lifetime in the past 7-8 months.”

Within a week, Gantkowski said that the family was back on its feet. They opened the first North Carolina franchise of Dog Training Elite in early February.

The family plans on servicing the entire Charlotte region, from Gastonia to Salisbury. Eventually, Gantkowski hopes to open a brick and mortar location, perhaps in downtown Kannapolis. Gantkowski said that their primary focus will be personalized training sessions in people’s homes, but that they’ll also offer week long “boot camps.” The family also plans on helping people with disabilities and veterans train service dogs.

“I almost don’t want to stop and go to bed because the camaraderie and the reintegration of the family aspect,” Gantkowski said. “We’re focused on the same task and it’s phenomenal. I couldn’t be more pleased and we’re blessed.”

More information about Dog Training Elite, Charlotte, can be found online at dogtrainingelite.com/charlotte.