Josh Bergeron: Take the shot when it’s your turn 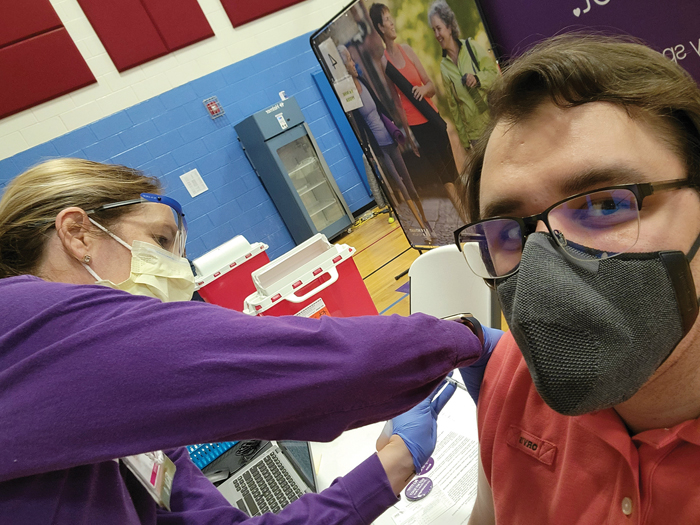 Your Salisbury Post editor gets his COVID-19 vaccination last week.

It was surreal last week to join the more than 18,000 people in Rowan County who have been partially vaccinated against COVID-19.

One year ago, the community was just beginning to feel the effects of COVID-19. On the front page of the Post on March 12, 2020, there were stories about President Donald Trump suspending travel to Europe, the hospital limiting visitors because of the new virus and Livingstone and Catawba colleges postponing or canceling events. Later that day, the state limited large gatherings, sports seasons were cut short and officials said they suspected someone contracted COVID-19 in Cabarrus County.

It remains a medical miracle that the United States has safe, effective vaccines for such a large portion of the population one year later.

In addition to health care workers, people 65 and older and educators, the following are some of those currently eligible in North Carolina:

• people who work in stores that sell groceries or medicine, which would include Food Lion stores or local pharmacies

• farm workers, which could include people at operations as large as Patterson Farm or something less ambitious

• college and university instructors and support staff, which could reasonably include any employee at any of Salisbury’s four higher education institutions

• restaurant workers, which could include anything from places with white table cloths to Taco Bell

• people who work at the courthouse, which could be anyone from judges to clerks

Starting this week, people with high-risk medical conditions also can receive a shot. That includes people ages 16 and up with conditions such as asthma, cancer, diabetes, obesity or dementia.

It’s important to take the vaccine when it’s your turn. To check when you’re eligible, visit yourspotyourshot.nc.gov.

I was able to be vaccinated because news media fall in Group 3, which became eligible March 3.

While the Rowan County Health Department provides a well-run, weekly drive-thru clinic, I opted for Novant Health’s clinic at the J.F. Hurley YMCA because there are options for days of the week other than Thursday. Scheduling an appointment can be done by logging into your MyChart account. Novant Health’s system allows people to pick any time that works.

Inside the YMCA’s gym, you’ll find a table with workers putting information into computers, an area for people to wait before appointments, a row of tables where health care workers administer vaccines, a table to schedule second doses and dividers with Novant Health graphics between tables and waiting areas. Being vaccinated is painless. Since getting my shot, I’ve only experienced a sore arm.

With the shot, I received a button, sticker, Centers for Disease Control and Prevention vaccine card and health-related information. The button and sticker are good for posting pictures on social media. If you post a picture with a vaccine card, it’s best to obscure personal information.

Unless your social media accounts are set to private, posting an unobscured picture of your vaccination card gives free, personal data to anyone who stumbles across it on the internet. That includes where you got the shot, when you got it and your date of birth. You don’t want most people on the internet to know that.

Other options for sharable photos: ask if it’s OK to take a selfie while you’re getting the vaccine, ask someone if they can take a picture of you in front of the dividers inside of the YMCA, bring a friend or family member to take a picture or post an image of the button or sticker.

Picture or not, get vaccinated so another spike in positives, hospitalizations and deaths isn’t in the future. Fewer than 50% of Rowan County residents 65 and older have received a vaccine.

If that percentage holds across the general public, the pandemic might stick around at concerning levels in North Carolina into next year.

For people who aren’t fond of the restrictions we’re living with, getting vaccinated means they’ll end sooner.