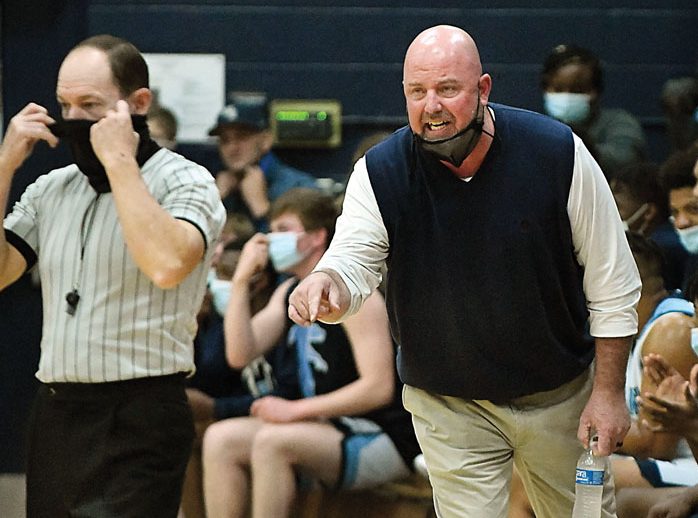 West Rowan's Mike Gurley has words for the ref. File photo by Wayne Hinshaw, for the Salisbury Post

MOUNT ULLA — Mike Gurley received the Rowan County Coach of the Year accolade for the first time way back in 1998.

He’s still around, still kicking, still stomping and still screaming occasionally. This is the 10th time he’s been honored by the Post.

Gurley has coached the Falcons in 652 games, 439 of them victories, including this season’s 15-2.

The second-best mark by a Rowan boys team in this abbreviated COVID season was Salisbury’s 8-5.

Gurley’s Falcons were North Piedmont Conference co-champions, NPC tournament champions and they were the only Rowan team to win a playoff game. They won two in what was West’s most rewarding and resounding season since 2010.

Gurley, a Salisbury-Rowan Hall of Famer, was happy to accept his latest accolade, but he insists that it should be a co-coach of the year award shared by West assistant Dadrian Cuthbertson.

“Dadrian and I are from the same side of the street, but sometimes he sees things differently, sees things that I don’t,” Gurley said. “I know we couldn’t have done what we did without him. I’m a man-to-man coach and I can be really stubborn about that, but Dadrian favors that Syracuse zone defense (a 2-3 matchup zone) and that’s how we decided to go with this team. That Syracuse defense became a real strength for us. It was a huge part of who we were.”

West had long defenders, most notably Macari Allison, a 6-foot-3 athlete with the wingspan of a much taller player.

Gurley had Jalen Moss to handle the ball, pass and score. Renowned scorers Braden Graham and AJ Mauldin showed they could fit in. They had come to West  in Graham’s case or had come back to West in Mauldin’s case, with the idea of winning, not with the idea of boosting  lofty scoring averages. Zeek Biggers, at 6-foot-6 and 330 pounds, proved an imposing rim protector in the zone defense. Sixth man Juke Harris showed he has one of the county’s brightest futures.

It turned out to be a really good team that proved its mettle with a 64-52 victory against North Iredell in the NPC tournament championship game. That showdown was for the NPC’s top playoff seed.

“We started working in July, two or three times a week, following all the protocols, but doing everything in our power to be ready for a championship season,” Gurley said. “I saw the guys improving their skills every day. Then it was just a matter of putting it all together once we were allowed to put it all together.”

West averaged a whopping 76.1 points per game, but even more significantly, it allowed only 54.3. That was a defensive improvement of almost 10 points per game over 2019-20. West posted its best defensive numbers since the 2008-09 season when Gurley had 6-foot-8 KJ Sherrill patrolling the paint.

“In all three of our playoff games this year, our defense was beautiful to watch,”  Gurley said. “Even in the Crest game that we lost. We just didn’t shoot the ball well enough to beat Crest.”

Gurley loves to discuss the history of West basketball, to talk about coaches Jack Lytton, Charles Hellard and Bob Shipwash and the great teams they coached prior to his own titanic tenure in Mount Ulla that has included two state titles. He’s proud that this season’s team will take its place in West annals as a champion. As crazy and challenging as it was, it turned out to be a gratifying season.

“We owe this one to Dadrian Cuthbertson, and he definitely loves that West history just as much as I do,” Gurley said. “Dadrian was part of that history. No one loves West more than he does. No one wants to bring back the greatness more than he does.”

Salisbury wasn’t far from being Central Carolina Conference champion. The climactic game with North Davidson to decide the title went down to the end. North Rowan recovered from 0-4 to finish 6-6. East Rowan’s official record was battered by three forfeits, but on the court, the Mustangs had some of the best wins they’ve had in years. South Rowan won four and was more competitive than anyone anticipated, and the same could be said for a Carson team that was basically starting over.