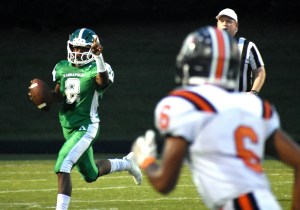 Ranked 10th in 3A by MaxPreps, the Wonders (3-0, 3-0) opened with an emphatic victory against Northwest Cabarrus, but they needed two overtimes to beat Central Cabarrus in Week 2 before surviving Cox Mill on Friday.

But the Wonders brought out the best in the Chargers (0-3, 0-2), who had negligible offensive production against West Cabarrus last week.

The Wonders needed Amareon Plummer’s rushing TD and a 2-point conversion by Tyriek Harris to get to halftime 21-all.

Kromah’s second TD pass — this one to Jacob Booker on a 30-yard connection — put the Wonders ahead 28-21 in the third quarter.

Cox Mill tied the game with about seven minutes left, and the teams were still deadlocked at the end of regulation.

Flowe’s TD run from the 7 in OT and a defensive stop meant anothe rexciting win for the Wonders.

West Cabarrus is next for A.L. Brown.