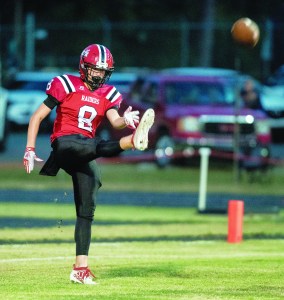 LANDIS — South Rowan’s 2019 football season included several ugly nights, but the lowest valley may have been the discouraging 57-7 beating the Raiders took from Thomasville at Cushwa Stadium.

Thomasville is usually just too fast, too quick, too strong, too everything for the Raiders to deal with. That’s why South owns one win over the Bulldogs in the history of the football program.

But Friday’s adventure at Donnell Stadium was different. Thomasville is as fast as ever, but South had a shot in a game fought fiercely in perfect March weather.

The Raiders competed with the Bulldogs — and then some.

South first cousins Nathan Chrismon and Jackson Deal are really quick, and their teammates matched their toughness. Thomasville won it 36-24,  but it was still up in the air in the final minutes.

South still had a chance, down six, until Thomasville’s hard-charging back Jabrii Carolina (13 carries, 97 yards) moved the first-down chains with 1:25 remaining. Then Carolina broke a scoring run for the final margin.

“Heck of a football game,” Thomasville head coach Kevin Gillespie said. “South Rowan played really hard and their quarterback (Chrismon) is a player. He can move and he can sling it. We made a ton of young mistakes, but our guys did a great job of fighting and overcoming them. We kept our composure and because of that, we got out of here with a win.”

South’s defensive plan was to stop Thomasville (1-1, 1-1) from ramming the ball down their throats, and the Raiders stood firmly against the ground game. Luke Hiskey, Drew Watkins, Ward Bond. A lot of guys with hard noses stuck them into every collision and every pileup.

South (1-2, 1-1) made the Bulldogs turn to the aerial game, but Thomasville QB Landon Johnson, who has receivers who never seem to drop anything, responded with a monster game. Johnson completed 20 passes for 302 yards and accounted for four touchdowns.

It was still 0-0 after a first quarter in which South’s defense made three stops.

Thomasville muffed a punt, and Hiskey recovered it in the red zone, but Alex Fike was wide left with a field-goal try from 28 yards.

The quarter ended with Thomasville trying to punt. When the punter knelt to corral a low snap, his knee touched the grass, and South had another  opportunity. This time the Raiders scored, with Chrismon faking, keeping and whirling around the left side for a 20-yard score. Fike’s PAT made it 7-0.

The Bulldogs retaliated with a series of completions for a drive. Johnson’s 4-yard TD run sliced South’s lead to 7-6, but a 2-point conversion pass failed.

Then South took a 14-6 lead. Another good fake, a crunching block on a linebacker by fullback Darrion Cuthbertson, and Deal came bursting through the line on an iso play for a 52-yard touchdown.

“Third time in a row we’d run that play, and Nathan told me exactly where the running lane was going to be,” Deal said. “Our offensive linemen did a great job. This time I opened my eyes and saw the hole and I hit it. I could hear a guy getting close right behind me, but I remembered my sophomore year when I had a chance to score and a Thomasville guy caught me from behind. No one was catching me this time.”

As was the case all night, whenever South scored, Thomasville responded. Even after a sack by Aquiles Bernal for a huge loss (“It’s second and a social distance,” roared South’s PA man), the Bulldogs still rolled to score and tacked on the 2-point conversion for 14-all.

It was still deadlocked at 14 when South got the ball back with a little over a minute left in the half. South head coach Daniel Yow sent a strong message that it was time for a change. South didn’t try to kill the clock. South was aggressive, and Chrismon connected on three straight big pass plays. The biggest was a terrific catch in the end zone for a 31-yard touchdown by JD James with just 25 seconds left in the half.

“We need to take that step where we show we can play with, and even beat, some of the upper-tier teams in this league,” Yow said. “At the end of the half, I was just hoping we could get into field-goal range, but we made great throws and great catches.”

Unfortunately for the Raiders, 25 seconds was still time for Thomasville to strike back. Johnson spotted Lymeake Washington running free to the post, and the Bulldogs struck gold in the dying breaths of the half. They tacked on another 2-point conversion and grabbed a 22-21 lead as the teams headed to the break.

“That was tough,” Yow said. “A defensive breakdown and Thomasville capitalized. They’ve got athletes.”

South went from extreme elation to extreme deflation in a matter of seconds.

“That was a big swing right before the half,” Deal said. “But we handled it. That didn’t beat us. We still got the lead again.”

That was true enough. The defensive untis took over again in the third quarter.

Chrismon, who threw for 176 yards, hit on several passes late in the third quarter to get the Raiders moving, and Fike’s field goal from the 31 was accurate. South led 24-22.

That lead lasted a handful of seconds.

Johnson tossed a swing pass to Washington ( 9 catches, 190 yards) and he motored 77 yards to put the Bulldogs in front. After the Bulldogs’ third 2-point conversion of the evening, it was 30-24.

Another Johnson-to-Washington pass play hurried the Bulldogs to the South 2, first and goal, but this time the Raiders stopped them when Jacob Ritchie broke up a fourth-down pass.

South got the ball back with four minutes left, down six, but had 95 yards to go. The Raiders could only advance the ball to the 9. Deal punted on fourth-and-6 as the clock moved under three minutes.

Then Thomasville moved the chains twice to seal victory, and Carolina broke his scoring run for 36-24.

South played it right down to the end, with Chrismon hitting Deal on a 42-yard pass play in the fading seconds. But then it was over.

It was a good win for Thomasville and for Gillespie, who didn’t take the reins until February.

“We were shut down for a while, didn’t get to play that first week of the season and then had three practices before we played North Davidson (a 24-6 loss),” Gillespie said. “We learned a lot from that game, and we had some of our kids in better positions tonight than we did in our first game. We’re still figuring it all out, and it’s a very short season.”

It was a defeat, but Yow managed to be upbeat.

“I think we turned a corner,” he said. “We made some of the most mature plays we’ve made since I’ve been here. Bad things happened, but we never hung our heads. We didn’t point fingers. We kept playing.”

Deal agreed with that assessment.

“This was a great football game with a team that was one of the top four in our league last year,” Deal said. “I heard some people say that’s the best they’ve seen South play in years, and I agree with that. It’s a loss, but it’s still a step forward. A big step forward.”