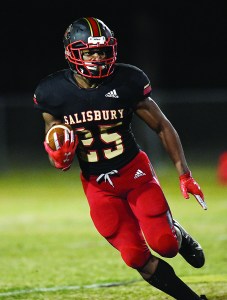 LEXINGTON — Salisbury bounced back from a loss to Oak Grove with an emphatic 51-0 Central Carolina Conference win at Lexington on Friday.

That was also the halftime score. The Hornets didn’t pour it on during a second half played with a running clock.

“I didn’t think we competed very well last week and I don’t think I did a very good of job of preparing us to play well,” Salisbury head coach Brian Hinson said. “We were sharper tonight. Defensively and offensively, we did an excellent  good job.”

Ranked 10th in 2A by MaxPreps coming in, Salisbury (2-1, 1-1) emphasized turning around takeaways.

“We’d been committing some turnovers and  hadn’t been creating them and we needed to turn that stat around,” Hinson said.

Salisbury did. There was a blocked punt and linebacker Jaden Gaither scored Salisbury’s first defensive TD of the season on a fumble return. Salisbury’s defense also recorded a safety.

Lexington only had one first down in the first half. That one came via penalty.

Vance Honeycutt threw TD passes to Deuce Walker, who turned a screen into a long touchdown, and Marcus Cook, who had his second TD grab of the season.

“We tried to simplify some things this week,” Hinson said. “We got back to the basics and played better.”

Salisbury has a big one next week at home against North Davidson. The Black Knights beat Ledford 35-24.