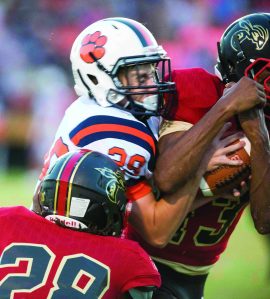 OLIN — The North Iredell Raiders were better than Carson head football coach Daniel Crosby expected them to be.

But so was his own team.

“They kick a field goal and they get a little bit of momentum, but then we take it right back in a big way,” Crosby said. “The kickoff return by Emory was a game-changer.”

Alex London threw two TD passes, with the other one going to Jake Harris.

Jordan Garland had a rushing touchdown, his fourth of the season, and Andrew Beaver booted a field goal.

“We weren’t flashy, just methodical, but it was a good sort of methodical,” Crosby said. “Offensively, defensively and on special teams we put together a solid performance. We were good in all three phases.”

Carson is at home next week for a big one with NPC and county rival East Rowan. The Mustangs lost to West Rowan 27-21 on Friday.