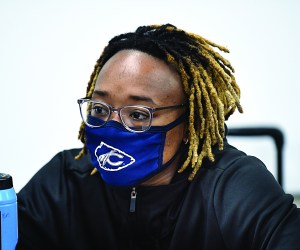 The Indians dominated host Carson-Newman at Holt Fieldhouse and won 67-48 in a first-round game in the Southeast Regional Tournament.

Catawba had been 0-5 in Division II regionals.

Catawba’s forte is defense, and that’s what the Indians won with.

South Atlantic Conference Player of the Year  Braelyn Wykle, who was averaging 23.6 points a game, was held to one field goal and seven points by Catawba’s defense.

Catawba is among the national leaders in forcing turnovers and had a 20-15 edge in the turnover struggle. Lyrik Thorne had four of Catawba’s 11 steals.

Veterans Taisha DeShazo, Talia Barnes and Marissa Bruce combined to shoot 8-for-14 and teamed for 21 points.

DeShazo made an early 3-pointer that put the Indians ahead to stay.

Catawba held Carson-Newman scoreless for three minutes late  in the second quarter to take a 34-23 lead at halftime.

Ten Catawba players scored. Depth has been another of the team’s strengths.