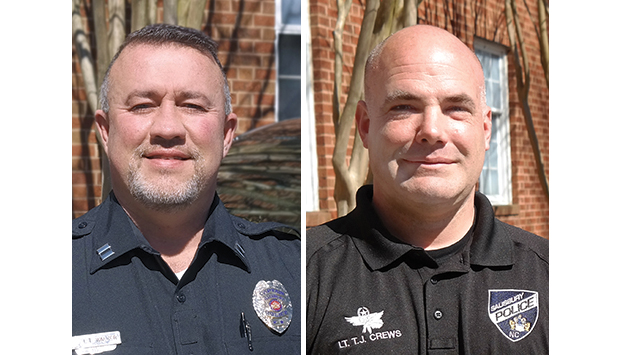 As part of a round of internal promotions, the Salisbury Police Department elevated Lee Walker to the rank of captain and T. Justin Crews to criminal investigations commander and public information officer.

Walker’s and Crews’ promotions follow last year’s departure of Deputy Chief Shon Barnes, who is now the chief of police in Madison, Wisconsin, as well as the promotion of Brian Stallings to the deputy chief position.

Walker will lead patrol operations in his new position. He most recently led criminal investigations and and was the department’s public information officer. His law enforcement career spans 25 years, beginning with the Appalachian State University Police Department. He began his service with Salisbury Police in 2002. His previous responsibilities included supervision of the patrol division, training and recruitment.

Walker holds the designation of master police officer and holds a bachelor’s degree in business administration from Catawba College. He has more than 3,000 hours of specialized law enforcement training and is a past board member and president of the Rowan County Peace Officer’s Association. He is a specialized instructor for Rowan-Cabarrus Community College and Davidson Community College.

Crews, a Salisbury native, has nearly 25 years of law enforcement experience. Before his career with SPD, he was a part-time deputy with the Rowan County Sheriff’s Department in various roles. Upon joining SPD, he was assigned to the K-9 squad, where he remained for nine years. Crews also served in a supervisory role in the narcotics and recruitment divisions

In April 2019, he was promoted to lieutenant and assigned supervisor of the Charlie and David patrol teams.

Crews holds an associate’s degree in criminal justice from Stanly Community College and bachelor’s degree from the University of Charleston, West Virginia. He has also earned a general, intermediate and advanced certificate from the North Carolina Justice Education and Training Division.