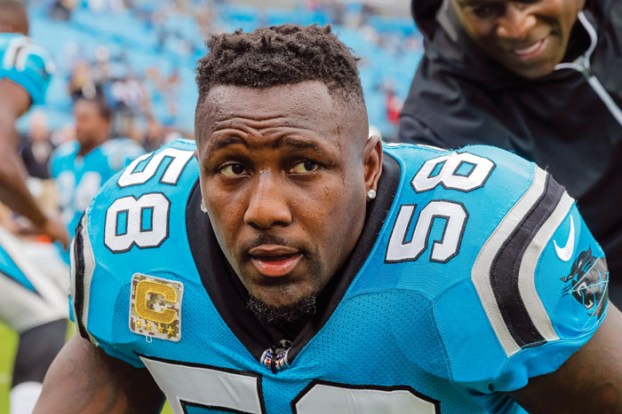 Panthers remember Davis, Olsen for greatness on, off field

CHARLOTTE (AP) — Thomas Davis and Greg Olsen, two beloved NFL players who developed into iconic figures in the Charlotte community, officially retired together on Thursday as members of the Carolina Panthers.

Davis and Olsen signed one-day contracts with Carolina and were honored jointly during a 90-minute virtual ceremony at Bank of America Stadium that was broadcast live on the team’s website.

“For the people here in Carolina, you guys are family — and I’m glad you guys came back home today,” Panthers owner David Tepper said.

Davis spent 14 of his 16 NFL seasons with the Panthers and is the team’s franchise leader in tackles with 1,258. Olsen spent nine of his 14 seasons in Carolina, finishing with 742 receptions for 8,683 yards, both fifth most in NFL history among tight ends.

But their success on the field was superseded by their reputation for giving back to the Charlotte community.

Davis was the Walter Payton Man of the Year award recipient in 2014, while Olsen was selected as a finalist for the award in 2017 and 2018.

Davis started the Defending Dreams Foundation which strives to encourage students to develop the essential life and social skills that will make them leaders of the community. Olsen created the HEARTest Yard Fund foundation along with Atrium Health to help other families after his son T.J. was diagnosed early in his life with a congenital heart condition.

“They understand there is more to life than just football,” said Washington Football Team coach Ron Rivera, who coached both players with the Panthers. “They both used their platforms for positive impact in the community.”

On the field, both were team captains and viewed as ultra-competitive warriors that helped the Panthers reach the Super Bowl in 2015 and finish 17-2. Davis was the emotional lifeblood of the team on defense, while Olsen was the cerebral leader on offense.

Davis said he never would have realized his full potential had it not been for former Panthers owner Jerry Richardson, who believed in him after he suffered his third torn ACL in 2011. Davis persevered and went on to play nine more seasons in the league.

Former Panthers running back Jonathan Stewart said Davis is the picture of perseverance.

“Everything you have overcome and all of adversity, this is what you were built for — you were built to inspire people,” Stewart said.
Olsen played his first four seasons for the Chicago Bears and said he was “mad and bitter” when he was traded to Carolina before the 2011 season.

He later said it was it was the best thing that could have happened to him.

After hearing of the trade, former Panthers linebacker Jon Beason began telling Davis how great Olsen was going to be in Carolina. Davis jokingly replied, “I am thinking that is a white tight end — ain’t no way he’s that fast.”

But Olsen proved everyone wrong with something he learned from his father, Chris, his high school football coach.

And that was the way we were expected to play and expected to live every day of our lives.”

Hendrick teams off to fast start heading into Phoenix