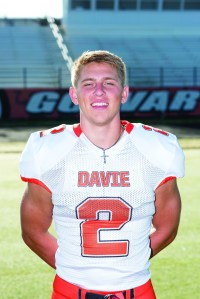 WINSTON-SALEM — The highest-scoring game in Davie football history, and that was just for starters.

Tate Carney, a junior who scored a remarkable total of eight touchdowns in Davie’s first two victories, was just getting warmed up, as it turned out.

Carney scored eight rushing TDs Friday, tying the single-game record acknowledged by the NCHSAA. He rushed 31 times for 321 yards and scored three TDs in one stretch of about five minutes.

Davie was actually outgained in the first half, but led 28-21 at the break.