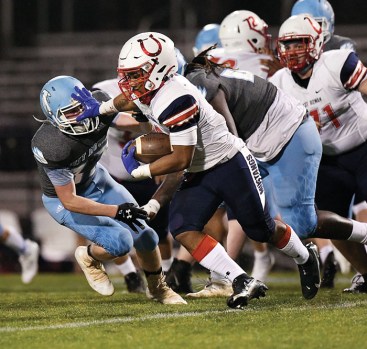 East's Sammy Pinckney carried 28 times for 218 yards and opened the scoring with a dazzling, 77-yard touchdown run.. photo by Wayne Hinshaw, for the Salisbury Post 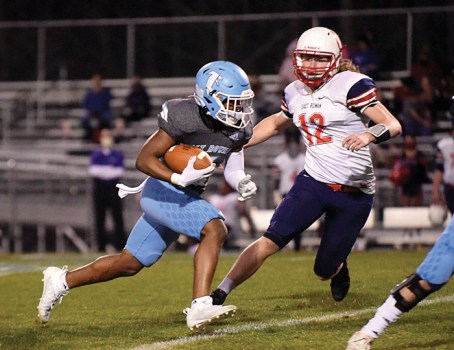 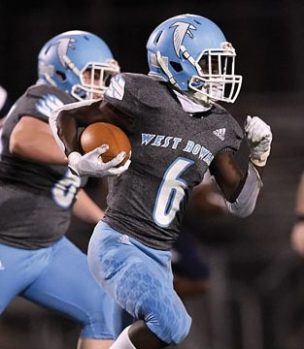 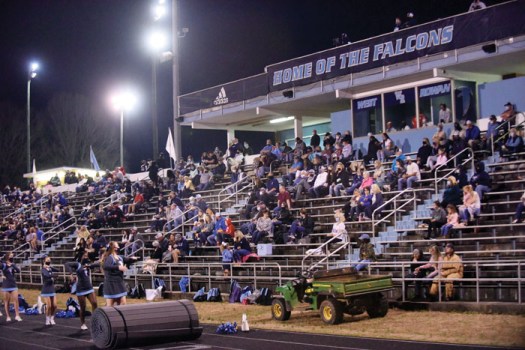 West's fans. photo by Wayne Hinshaw, for the Salisbury Post

It wasn’t blinding, but the Falcons doused an early-season fire, survived a stiff challenge from visiting East Rowan and escaped with a 27-21 triumph in their NPC opener.

East (0-3, 0-1) was the more consistent team. Powered by elusive senior Sammy Pinckney — the scatback who ran like he’d been dipped in grease — the Mustangs collected 398 total yards and 14 first downs. Pinckney carried 28 times for 218 yards and opened the scoring with a dazzling, 77-yard touchdown run just 2:20 into the game.

“He’s going to be the best player on the field pretty much every time he steps on a field,” said ER coach John Fitz. “But we’ve got to be able to do more with him and we’ve got to allow him to do more. We’ll figure this out.”

Pinckney couldn’t do it all for East, a team trying to keep its head above water during a difficult rebuild. West found its rhythm in the second quarter, when junior quarterback Noah Loeblein completed three touchdown passes in just over six-and-a-half minutes.

“We’ve been waiting to open up this passing game,” Loeblein explained after throwing for 190 yards and four TDs. “On the plays they needed to, the (offensive) line gave me some time. They seem to have trust in me and I have trust in them.”

West took a 7-6 lead when Loeblein tossed a 29-yard scoring pass to wideout Andrew Kennerly as the second period kicked off. Five minutes later Kennerly snagged a pass in a crowd, corkscrewed to his right and galloped 36 yards down the left sideline for a 14-6 West advantage.

“The first guy kind of shrugged off me,” Kennerly reported. “Then I made a move to the outside and got free. And at that point, it was just a matter of being faster than their guy.”

Following a three-and-out by the Mustangs, Loeblein found tight end Ben Sweet on another 36-yard touchdown play that made it 21-6 with 5:14 remaining in the half. “We really got hot there for a second,” said Kennerly. “It was good to get Noah back for a second game (following basketball season). Things were just clicking.”

East used Cole Eagle’s 23-yard field goal to close within 21-9 at the half, then inched closer when junior QB Cam Padgett (14-for-29, 134 yards) directed a 5-play/71-yard scoring drive to open the third period. His 15-yard TD lob to lanky Isaac Hinceman trimmed the deficit to 21-15.

West’s response was immediate. On a play-option from the East 39, Loeblein threaded a touchdown pass to Damon Phillippe, who outjumped a defender in the end zone with 9:25 left in the quarter. The final period featured an interception by the Falcons’ Hunter Watts and Padgett’s 6-yard touchdown pass to Vincent Jones in the waning moments.

“For all intents and purposes, we stopped (West) on defense,” Fitz said. “They had two or three big plays. We took some steps, but we’re still making little mistakes that are keeping us from winning. I’m talking about everything from not blocking the right people, to penalties before the ball is snapped, to not (being) in the right coverage, to dropping passes that should have been caught. I mean, nobody’s trying to do that, but in the execution part of the game, we’re lacking.”

“I know, but we’ve got a lot to work on,” said 300-pound defensive lineman Zeek Biggers. “And we know we can play a lot better. It’s our first win — and we needed that. Overall, we’re happy but not satisfied.”

Kraft was simply pleased to be on the winning side of the handshake line. “This year, in this league, that’s all that matters,” he said. “I told them after the game, ‘You can’t win all your conference games if you don’t win the first one.’ Mission accomplished.”

NOTES: Attendance was 615, but as many as 1,360 fans could have been admitted. … Kraft praised the hands work of receivers Phillippe (4 receptions, 88 yards), Kennerly (2 for 65) and Sweet (2 for 37). … East gained 40 yards on a halfback option pass from Aiden Schenck to Jones in the second quarter. Jones made seven catches for 108 yards. … East visits Carson next Friday while West travels to South Iredell.