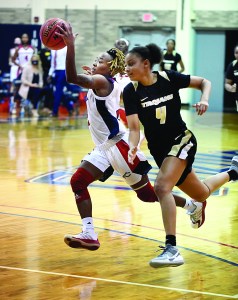 JEFFERSON CITY, Tenn. – One of the oldest rivalries in South Atlantic Conference history is renewed on Friday at 6 p.m. when third-seeded Carson-Newman and sixth-seeded Catawba square off at Holt Fieldhouse in the opening round of the NCAA Division II Women’s Basketball Championship.

SAC regular-season champ Carson-Newman exited the recent SAC tournament with a cold-shooting effort against Lincoln Memorial in the quarterfinals.

Catawba lost in the semifinals to Tusculum.

Dancing for the 11th time in program history, this is the first time Carson-Newman has been to four consecutive NCAA Tournaments. Carson-Newman (15-3) had been to the dance in back-to-back seasons once doing so in 2009 and 2010. This is the fifth time in coach Mike Mincey’s 10 seasons at Mossy Creek that the Lady Eagles are in the field.

This is the seventh time that a SAC school has hosted a regional, with Mars Hill in 2002 and Carson-Newman in 2018 the only schools to win the region when doing so.

Carson-Newman and Catawba (10-3) have met 71 times overall with the Eagles on top 38-33. This will be the ninth postseason matchup.

The Indians have 5-3 overall edge in the postseason. Seven of the eight meetings have come in the SAC Tournament. On Feb. 25, 1993, the teams met in an NAIA Tournament Regional game in Salisbury, with the Indians coming out on top 75-70.

The Eagles are in the midst of a nine-game winning streak in the series, the longest for either program in the 41-year history. The last time the Indians won a game against Carson-Newman came at Holt Fieldhouse on Feb. 6, 2016, an 82-78 triumph.

In the first matchup, C-N turned the ball over 29 times, the most by the club since Nov. 12, 2016, leading  to 30 Catawba points off of giveaways. However, the Orange and Blue escaped Salisbury with a 68-63 victory behind 55 percent shooting and 20 points from Braelyn Wykle.

“They are a really good team,” Mincey said. “We struggled over there to take care of the ball turning it over 29 times. It was a very frustrating game. We were very fortunate to come out of it with a win. That was the game that Lindsey [Taylor] went down with an injury with about eight minutes to go. We didn’t get to play them back here but no better time than the regional tournament.”

Catawba is making its sixth trip to the NCAA Tournament and first since 2015 and is looking for its first-ever win. The only time Catawba has won a postseason game in a national tournament came in 1993 when it won the NAIA District 26 tournament by beating High Point, Lees-McRae and C-N before falling to Wayland Baptist in the Championship.

Due to Covid, the Indians played the fewest games in the league this year at 13 winning five games in a row before falling 60-53 at Tusculum in SAC semifinals.  Eight of the 13 games have been on the road where the team is 7-1. Most of Catawba’s home/road splits are nearly identical with three double-digit victories.

Defensively, coach Terence McCuctcheon leads a team that is sixth in the country in steals per game with 12.6 per night, with nine double-digit efforts including 20 against Newberry on Feb. 17. The Indians have forced at least 20 turnovers 10 times.

At the other end of the floor, Catawba is middle of the pack and ranks 10th in three-point efficiency at 29 percent. Only Coker has shot worse from the foul line, with Catawba checking in at 66.4 percent.

Shemya Stanback and Lyrik Thorne are two of the best pilfer artists in the country, averaging 2.75 and 2.69 steals to rank in the top 25 nationally. Stanback was the lone Indian to garner postseason laurels being named a second-team selection The duo are the lone double-digit scorers for the club, with both checking in at a notch above 11 per game. Janiya Downs averages 9.9 off the bench and was on the All-SAC Tournament team.