Medically at-risk in N.C. able to get COVID shots March 17 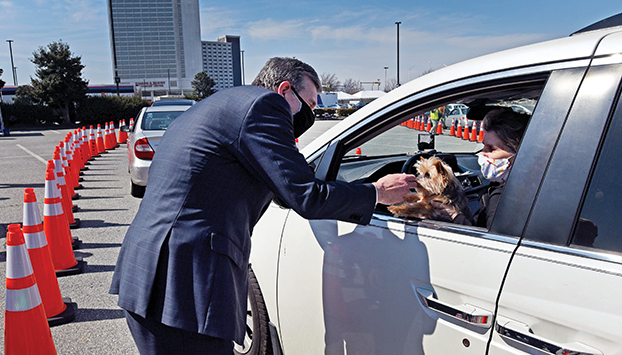 Gov. Roy Cooper talks with Emily Collins of Winston-Salem who brought her dog, Sebastian with her for her COVID-19 vaccination, Wednesday, March 10, 2021, at the FEMA-supported mass vaccination site onside Four Season Town Centre mall. Wednesday was the first full day of vaccinations at the site which includes both indoor and drive-thru vaccinatons. (Walt Unks/Winston-Salem Journal)

Those between the ages of 16 and 64 will be eligible starting March 17 if they identify as having any of 18 different conditions outlined by the state health department. Homeless and incarcerated individuals not yet vaccinated will also be able to get inoculated.

Democratic Gov. Roy Cooper and state Health and Human Services Secretary Mandy Cohen, said at a news conference that essential workers employed in one eight sectors and additional workers who have not yet been vaccinated will be able to receive their shot starting April 7. Frontline essential workers in those sectors can already be vaccinated if they need to be in person as part of their work.

“A lot of providers right now are ready to move to Group 4,” Cooper said, noting that some providers with backlogs may not be able to vaccinate medically vulnerable people once the March 17 eligibility begins.

Based on recommendations from the federal Centers for Disease Control and Prevention, North Carolina will qualify those who are or may be at increased risk for severe illness if infected with the virus. The state bundled together anyone with potential increased medical risk, thus making hundreds of thousands of people with a range of underlying health issues simultaneously eligible.

“We didn’t want to get too precise in trying to narrowly define who could go and who could not because that can slow you down,” Cooper said.

He added that he had previously considered requiring proof of medical condition as South Carolina elected to do, but ultimately decided against it.

“We found out early in the process that the less cumbersome we make this process … the better off we are.”

Smokers and former smokers, pregnant women, people with cancer, Type 1 or Type 2 diabetes, asthma, sickle-cell disease, cystic fibrosis and that who are overweight with a BMI above 25 are among those eligible for a vaccine starting next Wednesday.

The staggered rollout of Phase 4 of distribution comes as North Carolina expects to receive a greater supply of doses, including the Johnson & Johnson vaccine, which is currently seeing nationwide shipping delays.

Cohen, the state’s top public public health official, said new J&J doses aren’t expected to arrive until sometime around the beginning of April. She and Cooper are urging people to book the first appointment available to them, regardless of which of the three vaccines it may be. The two-dose Pfizer and Moderna shots and single-dose J&J vaccine are all safe and effective and do a great job at preventing hospitalizations and deaths.

“All three of these vaccines protect equally against serious illness and death, which is the most important thing when talking about COVID-19,” Cooper said.