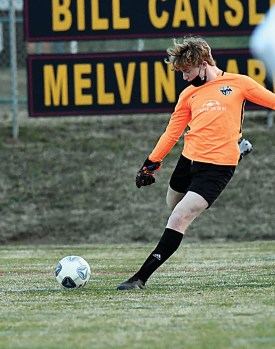 Salisbury's keeper Wade Robin 96 scored a goal for Salisbury kicking from the goal he was defending on the opposite end of the field.. photo by Wayne Hinshaw, for the Salisbury Post 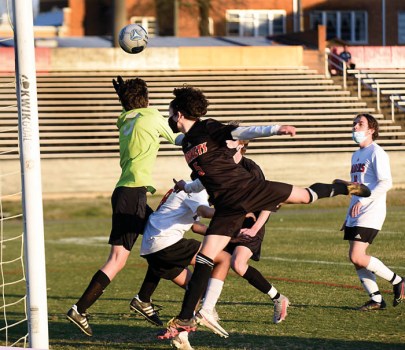 Salisbury's Dennis Anaya 5 tried to head the ball into the goal over the South keeper. photo by Wayne Hinshaw, for the Salisbury Post 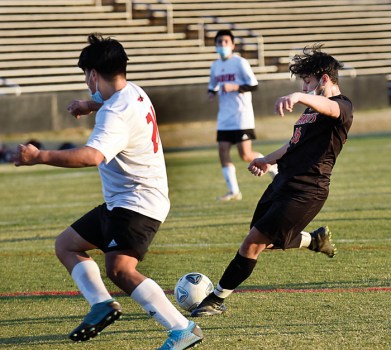 But the first order of business was a must-win outing as far as the Hornets’ playoff aspirations.

Salisbury took care of that. The Hornets easily handled South Rowan 5-0 to improve to 8-1-3 overall and 5-1-3 in the Central Carolina Conference.

“There’s ridiculous parity in Central Carolina Conference soccer, boys and girls, and that’s been the case for the last five or six seasons,” Salisbury head coach Matt Parrish said. “There’s no margin for error. We knew he had to win tonight. We had to, simple as that, and we did what we needed to do.”

Salisbury won’t finish first in the league, but still is looking to finish second or third. One of Salisbury’s ties was with Ledford, the first-place team.

“We had a very solid tie at Ledford, fought to a tie with an outstanding team,” Parrish said. “But we’ve also tied matches we felt we should’ve won.”

Three teams will get automatic playoff berths from the 10-team CCC. Salisbury holds the tiebreaker if the Hornets end up in a tie with Thomasville or Lexington.

Salisbury has completed its abbreviated regular season, but there are still some more CCC games scheduled for Thursday.

The most unusual goal on Wednesday was scored by Wade Robins on a free kick. He’s the goalkeeper. That doesn’t happen all that often.

Oglesby scored on a penalty kick.

Carlos Henriquez had two assists. Riley Dillon had one helper.

“A very bittersweet night with three seniors quite possibly playing their last game on this field,” Parrish said. “And our last match in the CCC, as we know it. This has been a great league, but everything is going to be different moving forward.”

Girls soccer season is fast approaching for Parrish, but the boys playoffs are just around the corner, as well.

Brackets will be announced by the NCHSAA on Saturday, with the field half of its standard size.

Playoff matches are scheduled for March 16, 18 and 20, with regionals on March 23 and state championships on March 27.