High school football: Bond’s stock as a Raider is rising 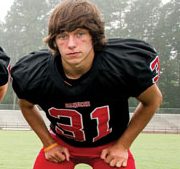 JON C. LAKEY/SALISBURY POST FILE PHOTO Ward Bond has bulked up from his earlier playing days, when he was also trying to make weight as a wrestler.

LANDIS — You have to go back to 2008 to find a game that South Rowan’s football team won almost entirely with defense.

That was the season South beat Lake Norman 7-3.

South didn’t win again with a single touchdown until it beat East Davidson 7-3 last Friday night on the road.

The centerpiece of South’s defensive effort was Ward Bond, a senior inside linebacker who was in on 15 tackles.

“I was no hero,” Bond said modestly. “The whole defensive unit was a hero. Just a lot of guys doing their jobs. That’s why I was able to make some tackles.”

Bond is an interesting story, starting with his name.

If you’re old enough, you remember a deep-voiced, towering Ward Bond who once filled up movie and television screens. He was a football teammate of John Wayne’s at Southern Cal and they also teamed up in a number of westerns. Bond wasn’t usually the star, just a supporting cop or sheriff or army officer or minister. He was in more than 200 films, 13 of which were nominated for the Academy Award for Best Picture.  In 1957, on television screens, he became truly famous for a few years as wagon master Major Seth Adams, who was leading a wagon train from Missouri to California. At its peak in 1959 and 1960, NBC’s “Wagon Train” was right up there with “Gunsmoke” as America’s most popular TV show. Bond died at 57 in 1960.

“I do know about him and I’ve heard about him,” the modern-day Ward Bond said. “Westerns, right?”

Bond played soccer and football at Corriher-Lipe, sports that are played in different seasons in middle school. In high school, they’re both normally played in the fall, so athletes, aside from kickers, have to make a choice.

As a South freshman, Bond showed up at the football field looking for information about soccer practice.

The person he encountered was South head football coach Daniel Yow, who was busy mowing the field.

It’s a “theft” that Yow has never regretted. Bond has become one of the Raiders’ leaders.

Bond was small, but feisty, as a freshman.
“I was 120 pounds then,” Bond said. “I had been wrestling in those days, too, but then I hit a growth spurt, and after that, it was killing me trying to make weight for wrestling. I put everything I had into football. I played cornerback as a freshman, and then safety as a sophomore. Junior season, I played corner or safety, whatever was needed most. This year I’m an inside linebacker for the first time, and I love it.”

After lots of weight training, he’s playing at about 5-foot-8, 170 pounds now, so he’s undersized, but not overmatched.

“The running joke here is that he’ll start at least one game at every position before he’s done,” Yow said. “He is somewhat undersized, but he makes up for it with heart and strength. And he’s full speed all the time. He was really good on Friday — nine solos and six assists. He was shooting the gaps in their line splits. He was turning plays back to his teammates.”

The film study of East Davidson, which was coming off a 9-0 win against West Davidson, provided a successful game plan for the Raiders (1-1, 1-0), who were looking to bounce back from a disappointing opening loss to Carson in which they surrendered 41 points.

“East Davidson is definitely run-heavy and used two tight ends a lot,” Bond said. “They used lots of dive plays, but sometimes the quarterback would toss it to a wingback or fake it to the dive back and keep it. Our linemen did a good job of pinching in and stopping the dive. That’s where it has to start. Stop the dive and make them try to do some other things.”

Bond and fellow inside backer Drew Watkins had huge tackle numbers because the three guys in front of them did their jobs.

“Our nose guard (Seth Boone or Harrison Shell)  was commanding a double team,” Bond said. “When that happens, the linebackers should have a good night. You can’t do anything without those big guys up front.”

South trailed 3-0 at halftime, but finally got a lead in the third quarter when QB Nathan Chrismon dashed 45 yards to score on a broken play.

South’s offense totaled 24 passing yards on the night, with just two completions, but the Raiders managed a respectable 183 rushing yards and were able to grind some minutes off the clock.

South’s defense made sure that seven was enough.

“The most memorable play for me was a third-and-short, and I knew the dive was coming,” Bond said. “I told Harrison Shell to be ready for it, and he was. He got his helmet on the football and caused a fumble. We worked together like that all night. It was a team effort, to say the least.”

The challenge for South is to keep it going this week in front of the home fans.

The opponent is Thomasville, which fell to North Davidson 24-6 last week.

“That’s a very athletic team, so we have to be very disciplined and we have to clean up some of the mistakes and penalties we had last week,” Yow said.

Bond agreed that the Raiders will be up against a more diverse and dangerous offense this week.

“Thomasville’s running back looks good on film, one of those guys who can start right and make a quick step to his left and go all the way,” Bond said. “They ran it on a third-and-14 against North Davidson and he broke about seven tackles, so we’ve got to respect what he can do. They’ll also throw it more than East Davidson did.”