High school basketball: 50 years ago, but still a classic 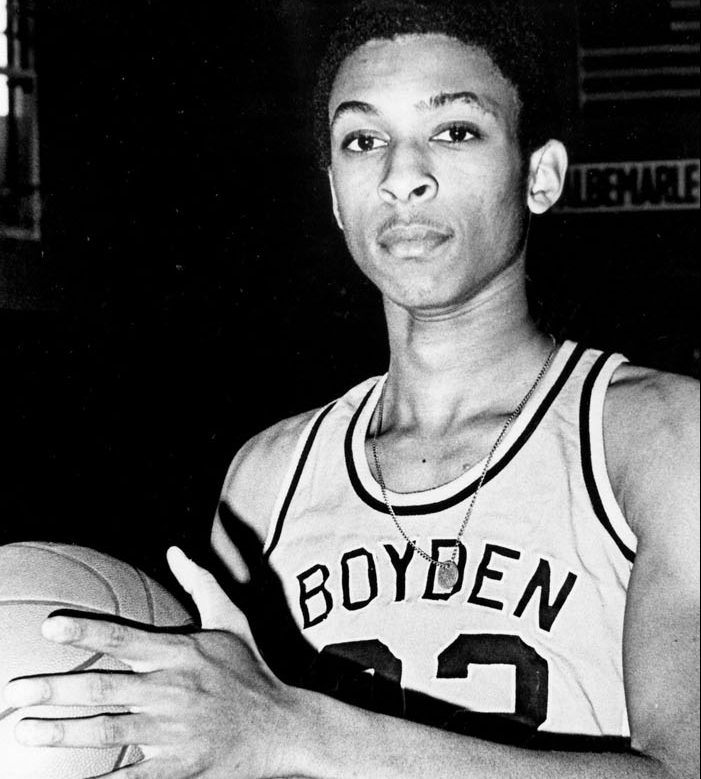 Salisbury Post file photo — Donald Bunyan was a key at guard for Boyden in 1971. He scored 14 in the classic matchup against Crest.

Fifty years ago, this week, Ali and Frazier were squaring off for the first time. Vietnam dominated every newspaper’s front page.

A half-century is long enough for facts to become myths, for feisty 35-year-old coaches to become 85-year-old Hall of Fame legends and for 17-year-old players who still survive to become retirees.

On Wednesday, March 10, 1971, old-timers will tell you that a local team achieved the greatest basketball win ever by a Rowan County squad.

They played it at Catawba College, when Goodman Gym was shiny and new and seated about 4,000 spectators.

They played it for the championship of the defunct Western North Carolina High School Activities Association.

Executive secretary W.A. Clary conducted the WNCHSAA tournament, with the help of Jack Turney, who represented Salisbury’s Boyden High, the host school for the event.

The WNCHSAA was just four conferences, albeit four exceptionally stout leagues, made up of schools in the Piedmont, foothills and mountains. While they weren’t state champions, as we think of them today, anyone who won a WNCHSAA title in any sport would have been a contender for a 3A championship in the NCHSAA.

The old folks can make a strong best-ever-victory case about that 1971 game, as the opposition was led by David Thompson, who would become, in the estimation of most experts, the greatest player in ACC history. Thompson was the leader of N.C. State’s unbeaten 1973 team (that was on probation) and the 1974 national championship run. He remains one of the legends of basketball. Thompson averaged 25 points per game, while shooting better than 50 percent, and was a perennial all-star in his first six professional seasons before drugs and alcohol started to take a toll.

In his prime, Thompson, who was in the 6-3 to 6-4 range, had an absurd standing vertical leap of 44 inches and he could bound 48 inches off the floor — that’s 4 feet — when he had momentum going on a dunk.

When Thompson and his talented teammates, the Crest Chargers, from the Boiling Springs-Shelby area, first came to Salisbury on March 5, they were unbeaten and Thompson was averaging 29.7 points per game. He was recognized as a national phenom. The Post reported that he was being avidly recruited by many colleges, with UCLA, North Carolina and Duke considered the front-runners.

But we now know how the recruiting battle turned out.

The WNCHSAA tournament of 1971 was a massive event that would start on March 5 and culminate with girls and boys championship games on March 10.

There were eight boys teams and eight girls teams in the tournament, the top two boys and girls teams from each of the four conferences.

Boyden was in the midst of a changing era socially and athletically, as Black athletes and students started to make an impact at a school that had been all-white until the mid-1960s.

J.C. Price, Salisbury’s Black school, had a strong basketball program for many years. The school was closed in the spring of 1969, as full integration arrived in Salisbury.

While basketball players still wore Boyden across their chests in the late winter and early spring of 1971, the school would become known as Salisbury High that fall.

When the epic 1971 game with the Crest Chargers took place, Boyden already had made the nickname transition from Yellow Jackets to Hornets.

The program was elevated by the addition of more Black players in 1968-69. Charles Lynn and James Brown were standouts for  the 24-2 squad that beat Shelby 56-50 for the WNCHSAA title.

Four of the top five scorers for Boyden’s 1969-70 team that went 26-0 and stifled Marion 50-35 for the WNCHSAA championship were Black athletes — Brown, Kenny Holt, Reggie Childers and James Partee.

The 6-foot-3 Holt had starred as a freshman and sophomore at J.C. Price, and he raised the level of Boyden basketball even higher with his phenomenal rebounding and defense. He wasn’t a shooter — rarely attempting anything outside of 6 feet — but he could score 20 working and leaping inside. He surpassed 1,400 points that season, more than anyone ever had scored in Rowan County. He was a perfect fit for a program that was built around the disciplined offense and a 1-3-1 matchup zone defense favored by head coach Bob Pharr, who had been a standout player at High Point University.

Boyden’s top four scorers in 1971 were Black — Holt, guards Donald Bunyan and Sheldon Shipman, and 6-foot-4 center Andrew Harris. The white starter was forward Terry Beattie, who didn’t score much, but rebounded and defended at a high level. The first men off the bench were Johnny Stratton, Bayard Alcorn and Bill Porter. Grayson Hampton, Ronald Poag and Darryl Alexander rounded out the 11-man team.

Boyden lost once in the 1970-71 season, falling to North Rowan 47-45 in the early going before embarking on a winning streak that lasted the rest of the regular season and through three games in the SPC tournament. Boyden had won 17 in a row when the WNCHSAA tournament got under way.

Crest came in 26-0 and was considered the co-favorite along with the Hornets.

On Friday, March 5, Crest took on A.L. Brown in a quarterfinal. Thompson showed what all the fuss was about with 25 points and 19 rebounds. Crest destroyed the Wonders on the glass (73-35) and on the scoreboard, romping 89-57.

Boyden showed what it was about when it debuted in the tournament on March 6, wiping out Cherryville 70-25. Ed Dupree, who led the Post’s high school coverage in 1971, did the research, and Cherryville’s 25 points were the fewest scored by a Boyden postseason opponent since 1943. Holt sat down early, but not until he had 21 points and 15 rebounds.

In the semifinals, Crest encountered a North Rowan team led by James Henderson, who is still the all-time leading scorer for the Cavaliers. Crest’s defense held the Cavaliers to 17-for-69 shooting. That’s under 25 percent. Henderson took 31 shots, but only made eight. Thompson put up 25 and 15, and the Chargers seized a 65-51 victory.

Boyden turned in another airtight defensive effort to throttle Marion 55-27 in the other semifinal. The Marion Rippers were led by Artis Gilmore’s brother, Frank, but the Hornets shut them down. Holt had 21 and 15.

Pharr watched Thompson wreck A.L. Brown and North Rowan, but he also respected what Crest’s other players could do if the Hornets focused everything on Thompson.

So Pharr didn’t change his defense for Thompson. The 1-3-1 had gotten the Hornets to the championship game. They stuck with what got them there.

It was a wildly anticipated final, to say the least — the undefeated challenger with a monumental player taking on a mighty program going for a three-peat.

Crest scored first, a long one from outside, but those were only worth two points in 1971.

Bunyan got the Hornets started. He made two deep ones for 2-all and for a 4-2 lead. Boyden wouldn’t trail again.

Then Bunyan made another one.

It was a fierce defensive struggle. Neither team made many shots. Holt was almost always in front of Thompson in the matchup zone, and he never let Thompson get going.

Thompson wanted to drive. Holt forced him to settle for jumpers, and the star was cold.

At the half, Holt had zero points and one rebound, but Bunyan was taking care of the offense.

After three quarters, the Hornets led 26-20.

Crest, seeking its first WNCHSAA basketball title, made its run in the fourth quarter and got within two.

With 34 seconds left, Holt came through with the game’s pivotal play, a steal and driving layup for a 39-33 lead.

Shipman made two free throws for the final margin of 41-33.

MVP Holt finished with 10 and 10, with all of his points and nine of those rebounds coming in the second half. Bunyan scored 14, Shipman got 11, with seven coming on free throws.

Thompson scored 14 to lead Crest, but it was a low-percentage 14.

In other words, the Hornets won with defense. They allowed 39.3 points per game in the 1970-71 season, while playing in a highly competitive league.

Not only was the 1971 title game a three-peat for Boyden, the rousing victory meant the program was 75-3 over a three-season stretch.

In 1971-72, competing as Salisbury High, the program nearly made it four in a row, even without Holt. The Hornets still had Bunyan, Shipman, Harris, Beattie and Stratton, among others, and they went 25-2.

There was a loss in the regular season to Statesville and a two-point setback to East Rutherford in the semifinals of the WNCHSAA tournament. East Rutherford went on to rout Freedom for the championship.

Those Boyden/Salisbury squads won 100 of 105 games in four seasons.

But it’s easy to pinpoint the most memorable of those 100 wins.

High school football: Bond’s stock as a Raider is…