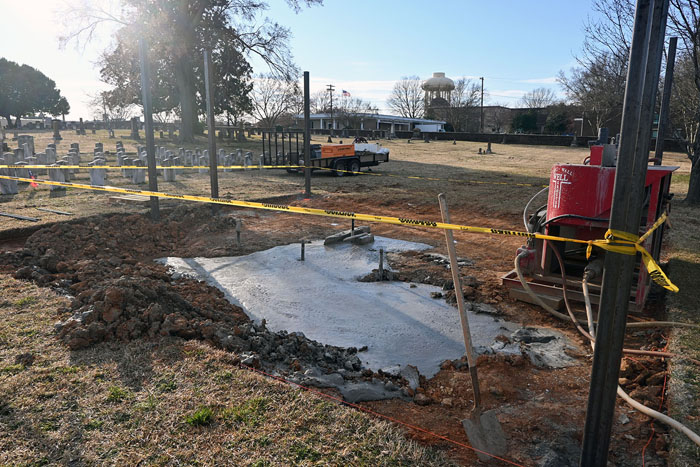 Natalie Anderson/Salisbury Post — Construction on the foundation that will soon support the "Fame" Confederate monument is currently underway at a historic cemetery on North Lee Street.

SALISBURY — Eight months after the removal of the “Fame” Confederate monument downtown, construction of the foundation that will soon support the monument is underway at a historic cemetery on North Lee Street.

In June, the Robert F. Hoke chapter of the United Daughters of the Confederacy, which owns the statue, and the city reached an agreement to relocate the monument from its downtown perch at the intersection of West Innes and North Church streets to a historic cemetery where Confederate soldiers are buried. The agreement came after Salisbury Police Chief Jerry Stokes and the city council deemed “Fame” a public safety issue with a vote at the June 16 meeting.

The city has paid for the removal, which took place in July, and will pay for its storage and relocation. The UDC has received an easement to the piece of property the monument will soon sit, and the Historic Salisbury Foundation has been tasked with overseeing around $65,000 in privately raised funds for site amenities.

City leaders attribute the long process to the multiple engineering studies needed prior to construction. Public Works Director Craig Powers said “micropiles” are being poured to help support the foundation, which is expected to be laid by the end of this week or next. Once poured, the foundation will set for about two weeks before site amenities are implemented.

Other site amenities include a custom, 8-foot-high, wrought iron fence, which Powers anticipates will be installed in April. The corner posts for the fence have already been placed. Then, brick pavers can be installed, and the city will be able to schedule the relocation with its contractor. Currently, the statue remains stored in an undisclosed location.

“Although the soil capacity was a challenge, we are pleased with the great work the engineers and contractor have done to create a firm foundation for ‘Fame,'” Mayor Karen Alexander said.

The city’s engineering department is handling the installation of the lights and cameras. Wendy Brindle, the city’s engineering director, said the lights will be installed by Duke Energy and will include upgraded LED street lights and flood lights. The city is currently going through the lease agreement process with Duke Energy and does not yet have an anticipated date for the installation.

Additionally, cameras will be installed by Axis and UNV once pole attachment agreements are also worked out with Duke Energy, Brindle said.

Juvenile shot in the leg on NC 801