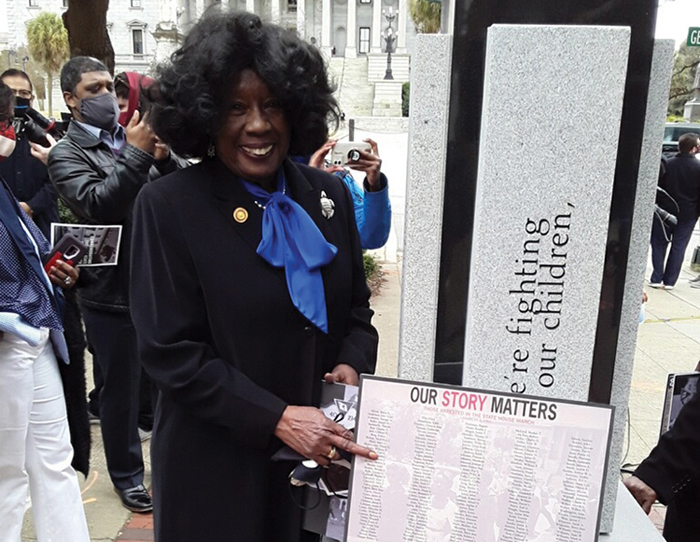 Photo submitted- DeeDee Wright points to her name as she poses next to a historical marker unveiled in Columbia, South Carolina, commemorating a march that occurred March 2, 1961.

SALISBURY — On the 60th anniversary of the day when she was one of 191 students arrested and jailed in Columbia, South Carolina, for peacefully protesting, DeeDee Wright last week returned to the site where she was once handcuffed and hauled away.

Wright, who now calls Salisbury home, visited Columbia for a ceremony honoring the peaceful protest at the state capitol on March 2, 1961, which led to a critical Supreme Court ruling that has provided increased protection for protesters.

Wright found her name etched into the bottom of the monument that will stand for years in the same place where she was once forcibly removed.

A day earlier, U.S. Rep. James Clyburn, D-S.C., who was also participated in the march, included a tribute in the congressional record that stated: “As one of the young people involved in this historic event, I can attest that we were committed to the fight for civil rights, and had no idea that our actions would contribute to preserving the right to peacefully protest for future generations.”

By the time Wright got into a car and drove from her hometown of Greenville, South Carolina, to Columbia to join the march in early 1961, she was already well established as a civil rights activist.

As president of the Youth Council of the NAACP Greenville Branch and secretary of the State Youth Council, Wright had been involved in several protests in her hometown the year prior. 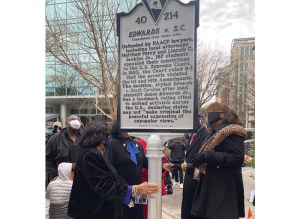 Along with civil rights leader Jesse Jackson, Wright was one of eight students known as the “Greenville Eight” who staged a sit-in at the whites-only branch of the Greenville public library in July of 1960. During the sit-in, Wright was arrested at just 15 years old.

“At that time, most adults really would not get involved,” Wright said. “Not that they pushed us out there, but a lot of them were fearful of losing their jobs, whatever they may have been, whether they were teachers, postmen or domestic workers. We decided we would take it on to fight for our rights.”

Wright’s brush with law enforcement didn’t stop her from participating in other protests, including a series of lunch counter sit-ins at a variety of downtown Greenville stores.

As one of the students who was arrested during a sit-in at S.S. Kress & Co., Wright was a defendant in the Peterson v. City of Greenville trial eventually decided by the U.S. Supreme Court in 1963. The court’s decision helped establish equality in accommodations for African-Americans.

Peterson v. City of Greenville wasn’t the only time Wright found herself involved with a landmark supreme court case. The next would stem from her participation in the March 2, 1961, march on the South Carolina state capitol. The protest itself was organized by the NAACP and brought together around 200 high school and college students to march from Zion Baptist Church to the State House to protest racial inequality.

“We were protesting the capitol at that point because we felt that we were not being treated fairly,” Wright said.

After the protestors made a lap around the state house, they were told to disperse. Instead, they stayed and started singing. Citing disturbance of the peace, police officers arrested almost every protester. 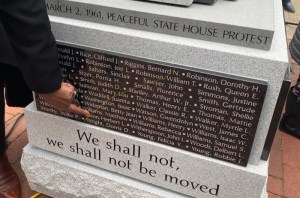 Wright had been arrested before, but this time, she had to stay in the jail overnight. Wright said that she remained imprisoned for about 24 hours, fed meals comparable to dog food and spent time in solitary confinement.

Once Wright was released, she returned home to Greenville and her concerned mother.

“She said, ‘Oh my God, you’re going to get us killed,’” Wright recalled.

No one harmed Wright or her family, but the increasingly horrific threats they received forced them to leave South Carolina for New York.

“Eventually we were run out of Greenville,” Wright said. “We started receiving threats of being killed and our house being bombed.”

The ramifications of the march on the South Carolina Capitol were long-lasting. On Feb. 25, 1963, the U.S. Supreme Court voted 8-1 in favor of the student defendants who were appealing their convictions for their part in the march. The Edwards v. South Carolina ruling remains one of the most important precedents for protecting protesting rights.

Wright has been back to her home state numerous times and has visited Columbia on multiple occasions. Perhaps the most meaningful was when she went back to the Capitol last week to see the historical monument honoring the protest and her part in it.

“It was surreal, in a word,” Wright said. “Upon reflection and coming back to Salisbury, it is something that I think will live on. It’s something to be honored in that way. I never dreamed that moment would come.”

The plaque was placed at the capitol by the Center for Civil Rights History and Research at the University of South Carolina. Wright credits Bobby Donaldson, the organization’s director, for making the memorial a reality.

“I owe him a great deal of gratitude for being persistent, being a magnificent historian and I’m so glad that he is continuing to document our stories,” Wright said.

The new monument wasn’t the only thing Wright noticed on her visit. The Confederate flag that flew atop the capitol building for over five decades was no longer there. It was removed in 2015 after the mass shooting at the Emanuel African Methodist Episcopal Church in Charleston.

“After we marched on the state Capitol, the Confederate flag was put atop the state capitol and didn’t come down until nine people were killed in Charleston some 50-something years later,” Wright said.

Although it’s been 60 years since the capitol march, Wright hasn’t given up the fight.

“I’m still fighting for the rights of others and since Salisbury is home, it still has a lot of growth,” Wright said. “There’s always a struggle for African Americans and given the climate today, the struggle continues.”