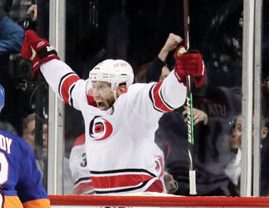 RALEIGH — Jordan Staal scored his second goal of the game with 34.9 seconds left in overtime to give Carolina a 3-2 win over the Nashville Predators on Tuesday night and extend the Hurricanes’ winning streak to six games.

Staal scored unassisted in the extra period, carrying the puck into the zone and beating Nashville’s Pekka Rinne to give the Hurricanes their first six-game streak in 10 years.

Sebastian Aho had a goal and an assist for the Hurricanes. Vincent Trocheck finished with two assists.

Matt Benning and Ryan Johansen scored for Nashville, which built a 2-0 lead in the second period, only to have Carolina tie the score by the end of the period.

Hurricanes goalie Alex Nedeljkovic made 21 saves. Rinne was credited with 32 saves as the Predators played the second game of an eight-game trip. Benning’s goal was his first in 25 games with the Predators after arriving as an offseason free-agent acquisition.

Despite the Predators going on two first-period power plays, the Hurricanes held a 15-7 edge in shots through 20 minutes.

Predators captain Roman Josi went on injured reserve earlier Tuesday with an upper-body injury. The team said his absence will be week to week. The injury occurred on a high stick from Dallas’ Denis Gurianov in the third period Sunday, even though Josi later notched the winning goal in a 4-3 shootout victory. He holds a three-game points streak.

Nashville stays for a rematch Thursday night as the third game of an eight-game road swing.

The National Hockey League will return to ESPN beginning next season. The two sides have reached agreement on a seven-year contract that includes four Stanley Cup Finals, people familiar with the deal told The Associated Press. The people spoke on condition of anonymity because the contract has not been finalized.

The deal was first reported by SportsNet in Canada.

NBC is in the final season of a 10-year contract worth $2 billion that gives it national NHL rights, but the league will air on multiple networks in its next agreement.

ESPN started airing NHL games when it went on the air in 1979 by making deals with individual teams. It had the national NHL rights from 1985-88 and 1992-2004. NBC has aired games since 2005 and is still among the bidders for the other part of the deal.