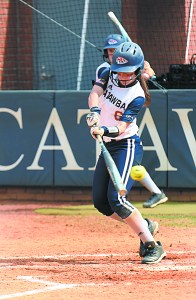 Madison Hunter (3-1) was the winning pitcher in relief of Brooke Walser.

Catawba won convincingly in the nightcap.

Dean’s two-run single in the first inning got the Indians started. Sydney Goertzen had a two-run double and a bases-clearing double to sink the Lions (6-9, 1-5).

Summer Howerton (3-0) was the winning pitcher.

Catawba travels to Carson-Newman on Saturday for a noon doubleheader with the Eagles.