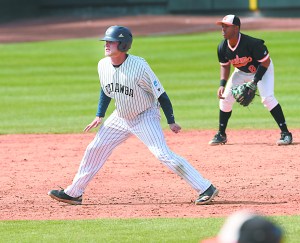 SALISBURY — Catawba’s baseball team pounded out a 13-10 win against Lincoln Memorial on Wednesday at Newman Park.

The game won’t count in the South Atlantic Conference standings.

Catawba didn’t hit any homers, but Joe Butts had a triple and Lee Poteat, Jeremy Simpson and Bryce Butler had doubles.

Catawba had 16 hits, with Hunter Shepherd going 4-for-5. Simpson and Butler drove in three runs apiece.

Brevard  plated five runs in the eighth inning and took a 9-3 non-conference baseball win over Pfeiffer  at Joe Ferebee Field.

One of the standouts for UNC is Mac Kiger, a returning All-American.

Catawba has announced its attendance policy for home football games against Newberry on March 20, and Barton on April 3.

Catawba will not sell general admission tickets and will not permit fans or parents of visiting teams.

With an allowance of 30 percent capacity at Shuford Stadium, Catawba will limit attendance to parents and family members of the football players and related student personnel. Catawba will admit football season-ticket holders, Catawba students, members of the Catawba pep band, Catawba cheerleaders and dance teams and Catawba employees.  Maximum capacity for these athletic contests will be 1,200 spectators.

Spectators allowed inside Shuford Stadium will be required to follow all COVID-19 related protocols, including wearing a face covering over the mouth and nose.

All-district teams were  announced by the NC Basketball Coaches Association on Tuesday.

Davie’s ZaHaree Maddox made the first team for District 11.

A.L. Brown’s Kheni Briggs was a first team pick for District 9, which includes the Mecklenburg schools.

All-district teams were  announced by the NC Basketball Coaches Association on Tuesday.

South Iredell’s Ashtyn Zeigler made the third team for District 11.

Robinson’s Ella Hobbs made the first team for District 9.

North Davidson’s Emily Hege was the player of the year for District 8, and ND’s Courtney McMillan made the second team.

The Mavericks scored ona 70-yard run down the sideline by Jonathan Ross, and  Quantarrious Thomas caught a 2-point conversion pass.

ACC Tournament: UNC, Duke roll on; Wolfpack has no…