ACC Tournament: UNC, Duke roll on; Wolfpack has no answer for Boeheim, Syracuse 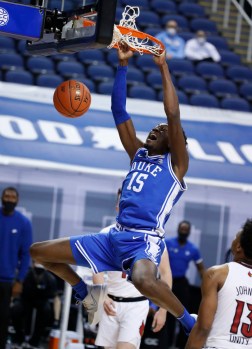 It was all Mark Williams on Wednesday night as the Duke freshman scored a season high 23 points and added 19 rebounds in the Blue Devils’ victory over seventh-seeded Louisville. Photo courtesy of ACC 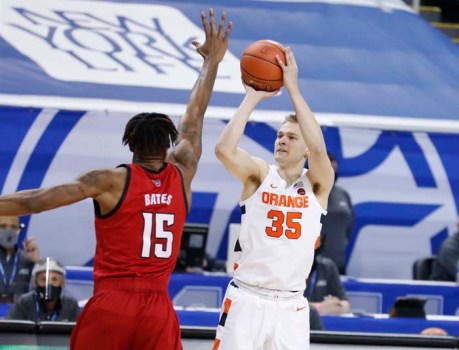 North Carolina State’s Manny Bates tries to defend a shot by Syracuse’s Buddy Boeheim, but the Wolfpack had no answer for the junior guard, who scored 27 in the Orange victory Wednesday. Photo courtesy of ACC

GREENSBORO (AP) — Big men Armando Bacot and freshmen Day’Ron Sharpe and Walker Kessler each had a double-double and North Carolina dominated inside in its 101-59 win over Notre Dame on Wednesday night at the ACC tournament.

Sharpe made three baskets in a 49-second span to make it 9-5 and the Tar Heels led the rest of the way. A 9-0 run pushed the lead into double figures for good midway through the first half and North Carolina scored 22 consecutive points during a 52-4 run that made it 101-51 with 2:65 remaining.

Prentiss Hubb and Nate Laszewski scored 13 points apiece for No. 11 seed Notre Dame (11-15).
North Carolina shot 51% from the field and had its highest-scoring game since the 2018-19 season, when the Tar Heels topped the 100-point plateau six times.

Freshman Mark Williams set season highs with 23 points and 19 rebounds for his second double-double, Matthew Hurt added 20 points, and No. 10 seed Duke eased by seventh-seeded Louisville 70-56 on Wednesday night to advance to the quarterfinals of the Atlantic Coast Conference tournament.

Williams is just the third Duke player over the last 25 seasons with at least 20 points and 15 rebounds in a conference tournament game, joining Marvin Bagley III and Shelden Williams, according to ESPN Stats & Info. Williams’ 19 rebounds were also the most by a freshman in ACC tournament history.

Duke opened the second half on its second sizable run of the game, scoring 17 of the first 22 points over a span of six minutes to extend its lead to 47-34. Jeremy Roach had two of the Blue Devils’ three 3-pointers during the stretch.

Louisville got within eight points three times in the final 10 minutes but could not get any closer as Williams took over the paint, scoring 10 of his points in the final 11:03.

Duke (13-11) plays No. 15 Florida State, the second-seed, today in their first matchup of the season after the Jan. 2 game was postponed due to COVID-19 issues within the Seminoles program.

Duke played Louisville twice in the regular season, losing twice as Williams did not play in the first meeting and Hurt’s career-high 37 points in the second game weren’t enough.

Roach, DJ Steward and Wendell Moore Jr. each added nine points for Duke, which didn’t have any bench points.

David Johnson had 14 points and 13 rebounds for Louisville (13-7), and Carlik Jones added 13 points

Hurt had eight points in a first-round rout of Boston College on Tuesday, and he topped that on a three-point play with 5:36 left in the first half against the Cardinals to help spark a 12-0 run for a 27-13 lead. Louisville scored the next 16 points — after its dry spell of five minutes, 11 seconds — with five points each from Jones and Johnson, and Hurt closed the first half-scoring to give Duke a 30-29 lead.

Buddy Boeheim scored 27 points with a season-high six of Syracuse’s 14 3-pointers, and the Orange beat North Carolina State in a second round game.

Syracuse (16-8) will face top-seed, and No. 16 Virginia on Thursday in the quarterfinals. The Cavaliers won the only regular-season meeting, hitting 14 3-pointers en route to a 81-58 victory on Jan. 25. Syracuse was 5 for 24 from 3-point territory.

Syracuse scored the first 10 points of the second half with 3-pointers by Quincy Guerrier, Alan Griffin and Joe Girard to build a 15-point lead. The Orange finished the half shooting 8 of 15 from distance.

Boeheim had three 3-point attempts in a 21-second span late, to try to reach a career high in points (29) and 3-pointers, but they didn’t fall and he went to the bench with 2:41 left.

Boeheim gave Syracuse its first double-digit lead at 22-12 on the first of his three straight 3-pointers. He finished with four 3-pointers in the half and 20 points on 8-of-11 shooting. The Orange shot 58.1% overall.

Girard finished with 14 points, Griffin and Guerrier each had 12, and Robert Braswell 11 for Syracuse. Guerrier picked up his fourth foul with 10:51 remaining and fouled out at 2:39. DJ Funderburk scored 14 points for N.C. State (13-10). Manny Bates added 12 points and Dereon Seabron 11.

Isaiah Wong scored 20 points for the second straight game and Miami became the first No. 13 seed to ever reach the quarterfinals in the ACC tournament, upsetting No. 5 seed Clemson.

Miami (10-16) advances to play fourth-seeded Georgia Tech today. The Hurricanes lost the regular-season meeting 87-60 on Feb. 20 — but it comes with an asterisk as Wong sprained his ankle in the first half and didn’t play in the second.

The Hurricanes have earned consecutive victories in the ACC tournament for the first time since 2013, when they won the title. Their three-game winning streak overall is their longest since they were 3-0, before a wave of injuries began to take a toll.