High school football: Davis does it all for Cavaliers 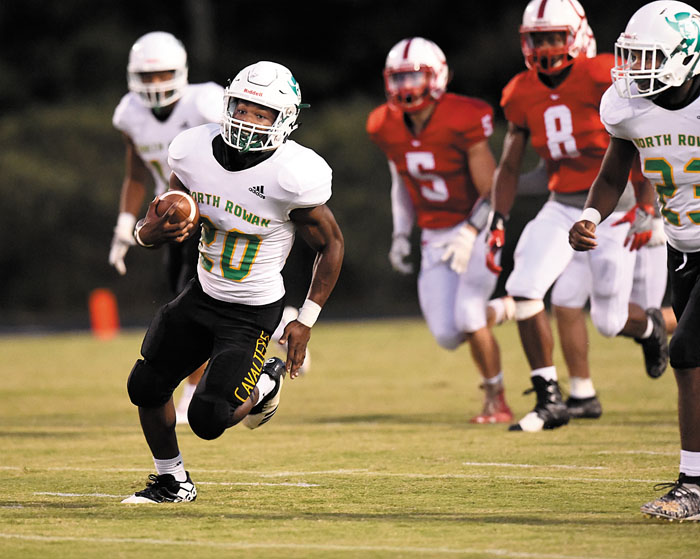 Salisbury Post file photo North’s Zay Davis on a kickoff return during a game against East Rowan in 2019.

New North head football coach Nygel Pearson knew he was inheriting special athletes when he got the job in April, but Davis has proven to be even more special in person than Pearson expected after watching his film.

Just about every North game from 2019 was a Davis highlight video. He’s one of the county’s elite defenders.

“So much positive energy from him every day,” Pearson said. “And he’s one of those do-it-all kids. If we try to kick a field goal or extra point, he comes off the field, but that’s about it. He stays out there.”

On both sides of the ball, Davis has brought athleticism as well as relentless energy for which he’s famous. He stands 5-foot-9, but it’s 69 inches of thunder and lightning.

A defensive demon since he played on the varsity as a freshman, Davis, who is about 170 pounds, is being used extensively on offense for the first time this season. He scored twice on opening night.

In Friday’s 44-18 win at South Stanly, Davis carried 17 times for 156 yards and three touchdowns. He intercepted a pass and made six tackles. He kicked off and he ran back kickoffs.

The Cavaliers are knocking on wood that nothing happens to QB Kyree Sims, who has accounted for six TDs in two games, but if something did happen, Davis is the backup quarterback.

Is Davis worn out from all that usage? Hardly.

“This is the dream come true, getting to play offense and defense,” Davis said. “It hasn’t been like this since middle school. When I got to high school, they put me on defense, and I’ve been all defense since then, sometimes a linebacker and sometimes a safety. I just play and I play with everything I have. I go all-out every play because you never know which play will decide the game.”

Davis wore No. 20 throughout his high school career. That was the family number. His late brother, Russell Davis, wore that jersey when he was Salisbury High’s leading tackler in 2006. His brother, Trae Clark, wore the No. 20 for North on that night in 2012 when he scored two defensive touchdowns, ran back a kickoff for a touchdown and tallied eight extra points.

Davis has switched back to No. 10 this season because that was his middle school jersey number, and he’s being asked to be a two-way athlete, just as he was when he played for the North Middle Mavericks.

When Davis got to high school in fall 2017 after starring in basketball, wrestling and football as a middle schooler, North had two excellent reasons to put Davis on defense. Namely, Jaleel Webster and Malcolm Wilson, a pair of running backs who were the Rowan County offensive players of the year for 2017, 2018 and 2019.

But it’s been obvious for a while that Davis was terrific with a ball in his hands. Every interception, every fumble return, every kickoff return, there’s always been a chance that Davis was going all the way.

In the thrilling win over Princeton in the 2019 1A state playoffs, Davis came up with a huge fourth-down stop, a game-swinging fumble return and a rushing TD after Wilson went down with cramps. That was a pretty typical game for him. He’s been doing that sort of stuff for a long time.

“We had a fourth-and-9 on Friday, and we were in trips and had them spread out, so we just handed the ball off to Zay,” Pearson said. “He got the first down.”

With North trailing South Stanly 6-0 and facing third-and-goal from the 10, Davis got the call and took it down to the 2. On fourth-and-goal, he put it in the end zone to tie the game.

Defensively, Pearson employs Davis as hybrid linebacker/safety, which is the ideal role for him. He’s tough enough to set the edge on plays coming at him and he’s fast enough to chase plays down from the back side when they run away from him. When down and distance indicate a pass play, Davis can drop into coverage where he becomes a dangerous and feisty DB.

“With Zay on one side and Tsion Delaney on the other, our defense has been playing exceptionally well in the early games,” Pearson said.

Davis has always played basketball for the Cavaliers, but he chose to not compete in hoops this school year.

“I wanted to focus everything on football and put all my effort into football,” Davis said. “I want to play football in college.”

His height works against him, but he should have a future in the sport. At the very least, he should be able to play special teams for a college program.

“He’s a super kid, a leader,” Pearson said. “I hate that I’ve only known him a few months. I wish I could redshirt him and keep him around.”

Yadkin Valley Conference rival Albemarle is sidelined by COVID quarantine, but North Rowan will play a non-conference home game this Friday against Hibriten High, out of Lenoir. Hibriten, a strong 2A program, demolished Bunker Hill and West Caldwell in its first two outings. Fred T. Foard was unable to play Hibriten this week.