Clyde: You are where you eat in Salisbury 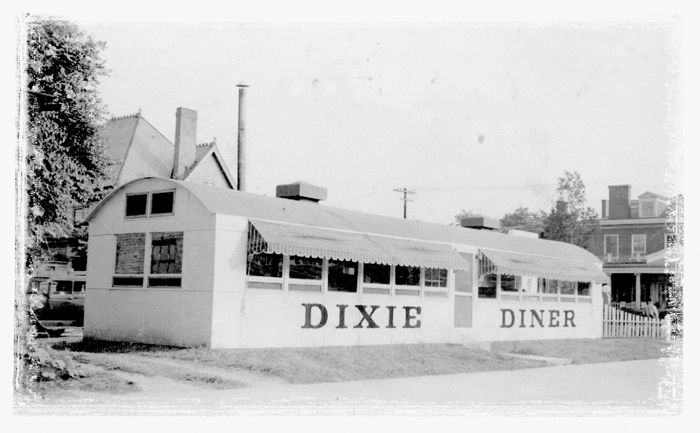 This photo shows the former Dixie Diner at the intersection of South Main and East Bank streets.

“A tavern is the rendezvous, the exchange, the staple of good fellows,” said Washington Irving.

You are where you eat.

Whether you stopped in at Wiley Lash’s New York Sandwich Shop at 133 East Council Street or ate on the divided blue willow plates at the Dixie Diner at 223 South Main, at the intersection of East Bank Street, you got what they had.

Now, you tell the fast food speaker box what you want and complain if you don’t get it. There are way too many choices to pick one with a line behind you. Decide before you get there!

If you went to Frankie’s Chicken Shack or even the Bus Terminal Cafe beside the jail, you knew what to expect. The jury is still out on whether or not Salisbury steak was born at the station. Let’s hope the Toot and Tell It phone No. 9243 was a drive-in. Joe’s drive-in didn’t have food in mind.

Barbecue joints were on every corner, opposite churches. Waitresses at Jimmie Blackwelders, the Red Pit, the Red Swan or T&F all said, “Whatcha gonna have, sugar?”

Cornbread morsels were food for dogs. First said in 1918, it became “Hush Puppy.” The British call it “take away,” and the first “to-go” bag lunch was probably at school when the cafeteria was closed for repairs. That PB&J is even better with Duke’s mayonnaise. The average person downs four or five a month, kids and adults.

The French penned “piquenique” and we ate it up and down the roadside. It wasn’t long until we stuck weinerwurst across a forked dogwood stick and called it a “weenie roast.” Don’t burn the marshmallows, made from the root of the marshmallow plant.

Greg’s Cast Iron boasts every iron skillet from Griswold to Wagner, seasoned with lard on the wood stove; cornbread (add sour cream and corn) with pinto beans and chow-chow looks as good as it tastes. Presentation is 90%.

Would you rather a bowl of mash or a warm pottery bowl full of stone-ground oatmeal covered with crumpled Frank Corriher sausage, drizzled with sourwood honey and eaten with a coin silver spoon? Talk about eating “high on the hog” was not about cracklin’, c-loaf, souse meat, livermush or scraps of scrapple — enough to feed an army of field hands. High class was with powdermilk biscuits. Folks made reservations for a linen table cloth at Dimizzios, the Chanticler or York Hill at the River for fine dining. The Yadkin Hotel Sunday lunch had it all.

The horn of plenty on every flag and seal with a cornucopia, corna and copiae, was from the horn of the goat that suckled Zeus. Those Greeks knew food and how to get it brought into those drafty temples. Vegans insist they can make a meal out of nuts and twigs and maybe a few bugs. Why do they look so frail and wan, my dear?

Nobody really knows hunger like the food-deprived anthropophagic troglodytes in caves waiting for their next hot meal impaled on a stalagmite. They survived miraculously, without straws, styrofoam or freezer bags. And we still like the taste of wild game: deer, a fat goose or opossum, squirrel or rarebit for a real Brunswick stew over an open fire in the backyard.

You couldn’t buy it at the “Big V” in Dixonville. So, go native, binge on your favorite food stuff, which you can now name in your heart before God.

Deuteronomy 21:20 says: “And they shall say unto the elders of the city, he is a glutton and a drunkard.” As the lady admitted, “We eat out a lot. Yeah, out of a can.”

Do you want fries with that, hon?