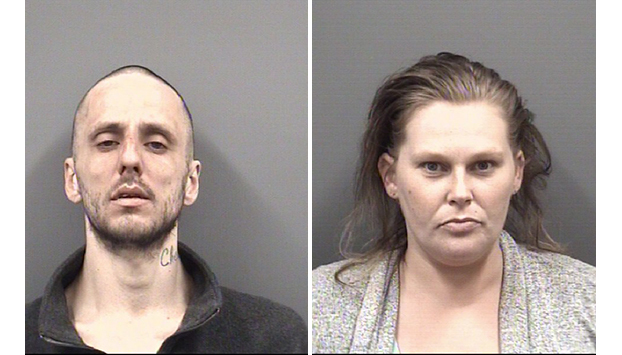 SALISBURY — A 35-year-old man and 33-year-old woman face a list of charges for allegedly breaking into a building on South Main Street that’s been a frequent site for thefts.

The charges stem from a routine business check on a storage facility at Royce Apparel, 5200 South Main St. At 11:48 a.m., a Rowan County Sheriff’s Office deputy said he saw a red Dodge Caravan backed up to a loading bay with the rear hatch open. Locks on a fence surrounding the building were cut.

An incident report stated the man was on the ground by the van and the woman was on the loading dock, handing down clothing items. The sheriff’s deputy said Gilley and Powers told him they learned about the building from a friend and thought it was abandoned.

In addition to clothes inside and next to the van, deputies noted a pallet of office furniture wrapped in plastic and a metal table frame beside the van.

Once both were detained, sheriff’s deputies found drugs and paraphernalia in Gilley’s and Powers’ possession.

Last year, the Rowan County Sheriff’s Office investigated an arson at the building and multiple thefts totaling hundreds of thousands of dollars.

• A woman reported a larceny Friday in the 700 block of Jones Road in Salisbury.

•  A woman reported a theft from a motor vehicle Friday in the 1000 block of Carols Campground Road in Rockwell.

• A woman reported a telephone scam Friday in the 100 block of Gwynn Street in Salisbury.

• A man reported a larceny Friday in the 100 block of Oak Mountain Road in Salisbury.

• A man on Friday reported unauthorized transactions on his PayPal account.

• An overdose death was reported Friday in the 9000 block of Unity Church Road in Mooresville.

• A man on Saturday reported a dog was stolen from the 300 block of Lynchburg Trail in Salisbury.

• A man on Saturday reported a burglary on the 2900 block of Agner Road in Salisbury.

• A man on Saturday reported a larceny Saturday in the 9600 block of Old Beatty Ford Road in Rockwell.

• Camp Wesley on Saturday reported property damage and vandalism in the 300 block of Deal Road in Mooresville.

• A domestic assault on Sunday was reported in the 400 block of Troutman Road in Rockwell.

• A burglary on Sunday was reported in the 1800 block of Shaver Road in Richfield.

• A woman on Sunday reported found property in the 200 block of Stonefield Lane in Salisbury.

• A woman on Monday reported vandalism in the 700 block of Forney Street.

CHINA GROVE — A 23-year-old woman faces charges after a man she allegedly sold fentanyl to died from an overdose.... read more