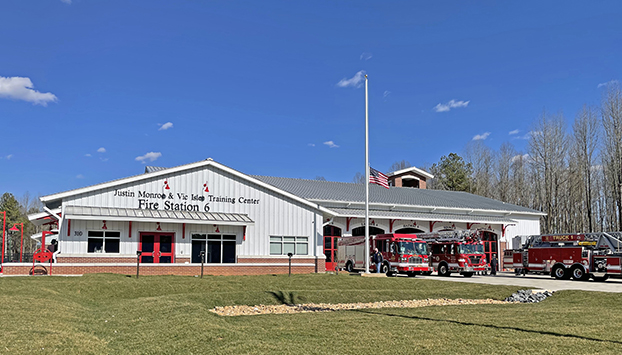 Natalie Anderson/Salisbury Post — Thirteen years after the death of firefighters Justin Monroe and Vic Isler, Fire Station 6, located on Cedar Springs Road, was formally dedicated to both men. Fire Chief Bob Parnell said the response time for the southern limits of Salisbury will reduce from 8-10 minutes to 2-3 minutes.

SALISBURY — Thirteen years after the death of firefighters Justin Monroe and Vic Isler, their families and city officials gathered Sunday to rejoice in the grand opening of Fire Station No. 6, where Monroe and Isler’s names will live on for the next century.

Monroe’s uncle, Walter Ferrell, recalled March 7, 2008, was a dark and cold day for the community. The two Salisbury firefighters were killed in 2008 while battling a fire at Salisbury Millworks. But on Sunday, the sun was shining bright as the community gathered in the crisp 50-degree weather.

Planning for the 21,000-square-foot building, located at 310 Cedar Springs Road, began years ago. Ground broke for the new station in October 2018. By last month, it was ready to go.

The station, which sits on around 6 acres, will be staffed 24 hours per day, include a training wing and a hazmat team in addition to fire operations staff. The new station will better serve neighborhoods located in the southern limits of Salisbury, which includes Camp Road, Long Meadow Drive, Grace Church Road, Airport Road and the neighborhoods of Stoney Brook, Kings Forrest, Matika Village, Little Acres, Weatherstone and the Long Meadow Industrial Park.

Also included in the station is a five-story tower and five truck bays.

“Today marks the 13th anniversary of losing two of Salisbury’s bravest men,” said Fire Chief Bob Parnell. “Today we get to dedicate a building in their honor.” 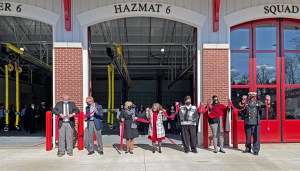 Parnell said the response time from firefighters for the area near Station No. 6 community will reduce from 8-10 minutes to only 2-3 minutes.

Salisbury City Council members in March 2018 approved a request to name the station in Monroe and Isler’s honor. In recognition of the city’s investment to the development of the station, Parnell presented Mayor Karen Alexander with the station’s highest honor — its version of a key to the city. That key was a commemorative axe that, like a key, “can get into anywhere,” Parnell said jokingly. 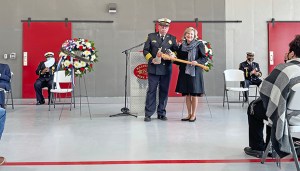 Natalie Anderson/Salisbury Post — Fire Chief Bob Parnell honored Mayor Karen Alexander with the fire department’s version of a “key to the city,” as he recognized the city’s investment to the development of Fire Station 6, a 21,000-square-foot facility that will reduce the response time for neighborhoods in the southern limits of Salisbury.

David Whisenant, a reporter for Charlotte TV station WBTV, was the keynote speaker for the day. Whisenant recalled March 7, 2008, as the “worst day on the job” in his 28 years reporting.

Whisenant noted that his father began as a firefighter in the department in the 1940s.

“These are the men you want to see on the worst days of your life,” Whisenant said. “But this is a day of celebrating something new for our community.”

Citing a biblical text from the Book of Ecclesiastes in the King James Version, Whisenant said, “Their names liveth forevermore.”

City officials differ on how, what information should be…