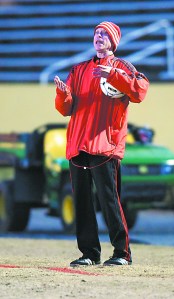 WELCOME — Salisbury and North Davidson’s boys soccer teams fought to a 1-all tie on Monday.

It was a hard-fought deadlock that could hurt the Hornets, who were trying to secure second place in a wild 10-team league that is guaranteed three playoff berths.

“We controlled our own destiny and had the opportunity to claim the Central Carolina Conference’s No. 2 seed in the abbreviated NCHSAA playoffs with wins in our two final matches,” Salisbury head coach Matt Parrish said. “But it just wasn’t meant to be.”

North Davidson scored first when Sean Bour converted a one-on-one with keeper Wade Robins in the fifth minute of the match.

Colin Donaldson had the equalizer on a free kick by Brayan Avilez that took a deflection in front of the ND goal.

It was a tale of two halves.

“I felt like North controlled the majority of the action in the first half and we had the run of play in the second,” Parrish said.  “Both teams had excellent opportunities thwarted by the opposing keepers, each of whom made three or four high-quality saves. In the end we just couldn’t break through.”

“On one hand it’s disheartening because we really had an opportunity to determine the outcome of our season and just couldn’t get it done,” Parrish said.  “On the other hand, the kids worked their behinds off the whole match and were trying to get it done all the way to the 100th minute.”

Next up for the Hornets is county and conference rival South Rowan Wednesday in the final regular-season match for the three seniors that will be honored at halftime — Dennis Anaya, Juan Cortes and Theo Oglesby.

South Rowan lost another close one on Monday, losing in overtime to Central Davidson.