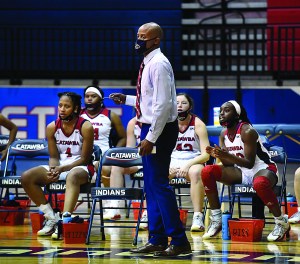 Carson-Newman won against Catawba 68-63 at Goodman Gym on Feb. 13 and was the South Atlantic Conference’s regular-season champ. Carson-Newman was upset by eight-seeded Lincoln Memorial early in the SAC tournament.

The other first-round game is fourth-seeded Tusculum (18-3) against fifth-seeded Tuskegee (12-1).

Due to the health and safety protocols surrounding the pandemic, regional sites were awarded to predetermined sites rather than to the top-seeded teams in each region.

Eight six-team regionals will be played March 12, 13 and 15. Regional winners advance to the  Elite Eight at the Greater Columbus Convention Center in Columbus, Ohio, March 23, 24 and 26.

Tusculum beat Lincoln Memorial 59-47 for the SAC tournament title on Sunday. A Lincoln Memorial victory would’ve put LMU in the regional with an automatic berth and would have knocked Catawba out.

SAC tournament champion Carson-Newman earned the No. 3 seed. Queens is No. 5, while Tusculum is No. 6.

The Southeast Regional is one of eight six-team regionals.

Eight regional champions will advance to the Elite Eight at the Ford Center in Evansville, Ind.