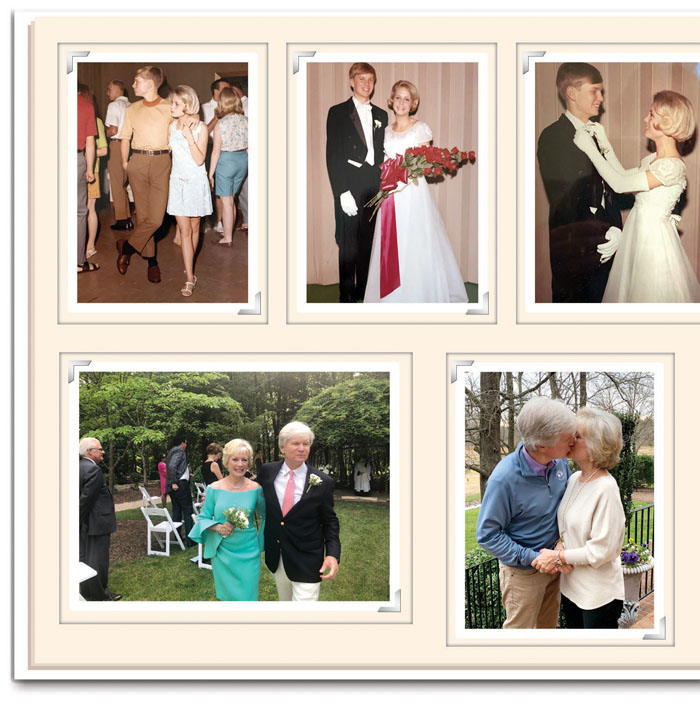 Fred Dula and Nancy Crews through the year. Submitted photos

The longtime radiologist in Salisbury continues now, “She was just beautiful. I’m telling you the truth. I was smitten and that’s never changed.”

They were sweethearts during high school and college, even getting engaged at one point. But Fred, bless his heart, was getting ready to start medical school. He needed to take more classes. He didn’t have any money, and couldn’t support Nancy the way he felt she deserved.

“It was always right for me,” Fred says, “but the timing was the problem.”

“It created a weird feeling between us,” Nancy admits.

There was no knock-down, drag-out fight. They just eventually drifted apart. Sure, Nancy says, it was a tough night when she gave Freddy back his ring. (She still calls him Freddy). But life goes on, and Nancy went on with her life. In 1974, she married Ray Earp (pronounced “Arp,”) a farmer who lived near Selma, in Johnston County.

“I regretted it,” Fred said. “But I knew she was well taken care of.”

He even went to their wedding reception, and somewhere, there’s a picture of him greeting the couple. He was the last person to go through the receiving line.

Fred went on with his life, too. He went to medical school, and married his wife, Lynn, before he started internship.

Still, he says, “I didn’t go a day without thinking of Nancy.”

Fred and Nancy’s alma mater, Lenoir High School, ceased to exist in 1977. Somebody thought it would be a great idea to have an annual reunion of all students.

In 2008, Ray had a heart transplant, and got along fine. But he was killed in a mowing accident in 2013. Nancy feels like he must have hit an unstable patch of ground, because he was so familiar with all sorts of farm equipment.

In 2018, Nancy took her mother to Charlotte for a wedding, where Fred was also a guest. He told them that if they needed anything while they were in town to let him know. He ended up driving them to the wedding and sitting with them as well. Since they were staying at the same hotel, Fred and Nancy went down to the bar after the festivities and had a drink and caught up with each other’s lives.

Two months later, Nancy got a text that Fred’s wife had died, and she and her mother went to Lynn’s funeral.

About six weeks after that, Fred called.

“Would you like to go out to dinner one night?” he asked her.

His wife had been sick a long time, he says, and he had grieved for a long time.

“I just figured I’d be single the rest of my life,” Nancy says, “and I was OK with that.”

But she was also OK with going out to dinner with Fred.

They met for dinner in Raleigh at Seaboard 18. She would not let him drive all the way to Selma to pick her up.

“First of all, I counted my lucky stars,” Fred says.

That fall, they started going to UNC football games, and Nancy came to the charity Christmas party Fred’s neighborhood always hosts. It was his turn.

“She helped me so much,” Fred says.

“I didn’t do anything!” Nancy says.

“She helped me by being with me,” Fred says.

Soon, he was making weekend trips to Selma.

“It was easy,” he says of their renewed relationship.

In February 2019 and February 2020, Nancy went with Fred to the annual Heart Ball in Salisbury.

Fred had been hinting about getting married, she says. “I never considered remarriage until I started seeing Fred.”

The Sunday morning after the 2020 Heart Ball, they were standing in his closet. (It’s a pretty big closet, Fred points out.)

“You spoiled my surprise!” Nancy said. “I was going to accept your earlier offers.”

Then, of course, their marriage plans were a bit spoiled by COVID. But they managed to have a lovely outdoor ceremony on June 6, 2020, near the gazebo between their house and Lee and Mona Wallace’s house, their next-door neighbors.

They spent a few days on Bald Head Island, then returned to Salisbury. They’ve been dividing their time since between Selma and Salisbury. Nancy closed on her Selma home after it was on the market just six days. She recently bought a house at Atlantic Beach on the same street as her daughter and son-in-law.

“I wanted to be near my family some,” Nancy says, “and it’s turned out that Fred knows half the neighborhood.”

Between them, they have four children — Chip Earp, 44, Leah Earp Hodge, 39, Stewart Dula, 31, and Caroline Dula, 26, along with Nancy’s three grandchildren, Reid Hodge, 10, Mary Katherine Hodge, 8, and Rachel Earp, 5. The kids all seem to have a good time together, Nancy says, and the grandchildren adore Fred. They call him Doctor Freddy.

Fred and Nancy are both 70 now, and that’s OK with both of them.

“I don’t mind having these many years,” he says. He appreciates the wisdom and maturity he’s gained.

“I have had two absolutely wonderful men in my life and some people don’t even get one,” she says. “He’s a great guy.”

At the end of December, Fred retired as a radiologist with Mecklenburg Radiology Associates  after 35 years. He soon realized that quitting cold turkey wasn’t the thing to do, so he’s going back to work a couple of days a week just in the Salisbury office. In the mean time, he and Nancy are working on merging the furnishings in their Salisbury home and getting the beach house ready.

So after all these years, the most popular guy and the prettiest girl at Lenoir High School are finally together for good.

“It’s so nice to be best friends, too,” Nancy says.

Ester Marsh column: Are you getting enough Vitamin D?

Rowan-Salisbury Schools sorts out transportation logistics in preparation for…