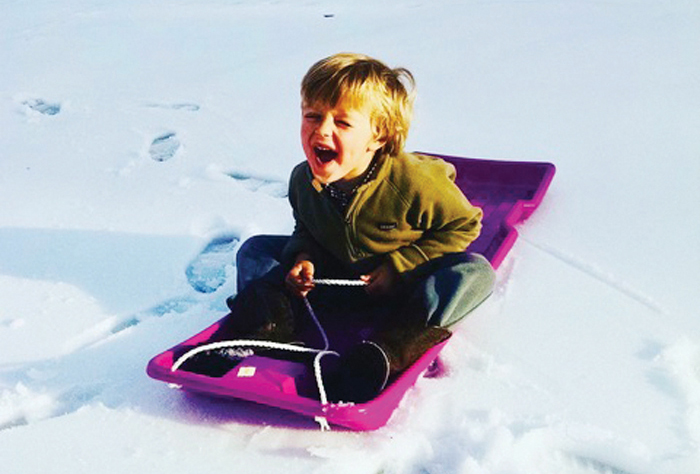 Kristy Woodson Harvey’s son Will sledd on the same hills she used to on his first Salisbury snow day.

The Rowan County School System will be closed due to weather. In my teenage years, that phrase on the school system’s automated phone line was music. Magic.

In the kitchen at my parents’ house, friends gathered around, I would call that number on the landline with the twisty cord, wait a few minutes and then hit redial. Then another friend would take my place. The instant the message changed from “will operate on a normal school schedule” to “will be closed” was like Halley’s Comet. It was rare and wonderful, beautiful and ethereal, and the person who got to hear it first was the true champion, the victorious one.

When one of us announced the good news, Mom, who was usually cooking something for the throngs of always-starving teenagers in her midst, would motion for the phone. She had to hear the message for herself before she’d confirm that we could, in fact, have a snow day party.

Even on a regular day, Mom was accustomed to having a dozen or more children — then preteens, then teenagers — piled in the playroom talking, laughing and listening to music. She, one of four sisters, was used to chaos. She let everyone drink Cheerwine, even though it stained her rugs, and was Pizza Hut’s best customer. She was the mom that everyone gathered around in the kitchen, eating Laffy Taffy and caramel apple pops from the massive candy bowl that never ran out. She was the mom that gave advice — real mom advice, not “Mean Girls” cool-mom advice — on everything from schoolwork to break-ups to the latest high school scandal.

She always had a car full of kids to drive home at midnight. Well, not midnight. Eleven fifty. Because if we didn’t leave by 11:50. my friends couldn’t make curfew and get through the Krispy Kreme drive through for some of those legendary hot-and-now doughnuts before they closed. The woman at the window knew our order by heart and always doubled it, so there were plenty of extras to take home to Dad.

But snow days were different. On snow days, the world grew quiet and still. On snow days, there was no work, no school. On the best ones, snow began in the afternoon, school had been called off by the evening, and by nightfall, there was enough white blanketing the hilly golf course outside our back door to spend hours sledding, making snowmen and having snowball fights by the light of the moon. Plain grassy fairways were transformed into fields of diamonds by something as rare and sparkling: the reflection of stars on snow.

On those nights and the days that followed, a pile of snow boots would gather by the door, little puddles of melted snow littering the tile floor. The dryer whirred constantly, full of mittens, gloves and scarves while Mom made hot chocolate and cookies, Bagel Bites and pots of chili to thaw frozen children with red noses and flushed cheeks. Those days were freedom. Those days were the unexpected surprise that added up to pure, unadulterated joy of the sort I will never stop chasing. Time stopped.

In some ways, this past year has been like a series of snow days. There is no doubt that it has been scary and hard and something I never want to repeat. But it is also a stamp in time that is certain to stay with us. The world might not have been blanketed in white, but it did go quiet.

I have, against all odds, found wonder in these days. Not all of them, of course. Quite a few have felt interminable, terrifying. But then the sun sets over the water. My son smiles. A neighbor stops to talk over the fence. I write a sentence that rings true.

During this past year, I wrote. And wrote. And wrote. I finished my forthcoming novel, “Under the Southern Sky,” which is, among many other things, a book about mothers and that moment when the how becomes infinitely more important than the who. I learned that from my parents, from snow days and regular days, church Sundays and work Wednesdays. We take care of people because they need to be taken care of — and not only the ones who share our blood.

That, perhaps, has become the lesson in a year when we have been called upon to help the sick and the lonely, neighbors and co-workers, friends and strangers. When we have learned that Main Street shops and independent bookstores, local restaurants and favorite charities cannot survive unless we all chip in. Because now, more than ever, we need each other. Now, more than ever, it is the act of loving each other that allows us to heal.

We have been fortunate in our tiny coastal town that every day brings brighter news. Many of our friends have received vaccines or have antibodies. Outside play — despite the cold — has resumed for our children in a fundamental part of their little lives.

As my son’s friends run behind him through the back door of our house and straight out the front, I am reminded of my childhood, of those snow days when all that seemed to matter was this moment and maybe the next. I know that I will never again experience life in this untethered way that my son and his friends do. But this new stage has its own simple pleasures. Will doesn’t stop, doesn’t miss a beat, only calls, “Mom, can we have sandwiches?”

He barely notices me, so consumed in the world he is building. But one day, I believe, he will look back, like I have, on the simplicity of a mom in the kitchen feeding his friends as an act of great love. Here at the beach, our snow days are truly few and far between. My dryer is much more likely to be full of wet bathing suits than soggy mittens. But the act of mothering is very much the same.

As I pull out the bread, start spreading peanut butter and stacking ham and cheese, I feel like I’m achieving some grand high purpose of my life. I stop and look up. Will these children one day be teenagers who spend their afternoons in our playroom, who will stand in my kitchen waiting for the news of a snow day? And, maybe more important, has the inevitable happened? Have I become my mother?

I certainly hope so.