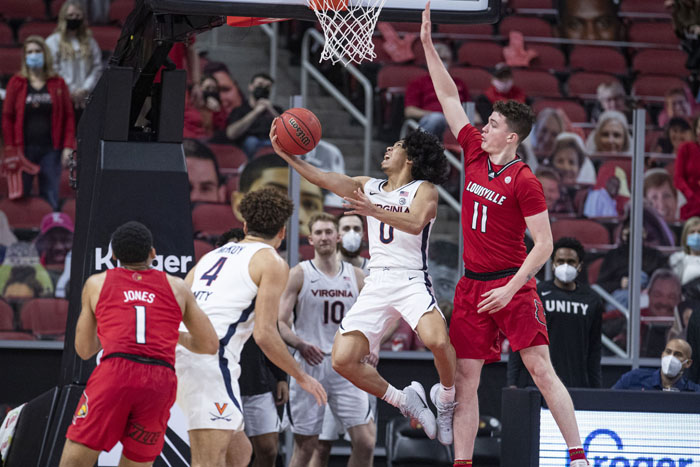 Virginia’s Kihei Clark goes up for a shot under the basket as Louisville’s Quinn Slazinski defends Saturday. Photo courtesy of ACC

No. 2 seed entering the regular-season finale, the Cavaliers (17-6, 13-4) got a boost when first-place and No. 11 Florida State lost 83-73 earlier in the day at Notre Dame. Virginia then methodically took care of the Cardinals (13-6, 8-5) to leapfrog the Seminoles despite a blowout loss at FSU in the season’s lone meeting on Feb. 15.

Hauser finished 9 of 14 from the field, making his first four in the second half, and grabbed eight rebounds. Murphy shot 7 of 12 and Jay Huff added 10 points.

David Johnson had 14 points and Jae’Lyn Withers 12 for Louisville.

The Fighting Irish (10-14, 7-11 ACC) had five players score in double figures in the program’s first win against a ranked team since a 67-66 victory over Wichita State in November 2017. They had dropped 28 such games in a row.

“I thought we had some edge about us to get loose balls and stick our nose in there and take charges, and that helped us,” coach Mike Brey said. “You’re not gonna really run anything pretty against an athletic, switching defense, (but) I thought we did a good job the last two days of practice talking about just opening the floor up and cutting more.”

Cormac Ryan, Nikola Djogo and Nate Laszewski had 11 points apiece for Notre Dame, which had dropped four in a row. Juwan Durham had nine points and nine rebounds.

“I thought Notre Dame did a better job of being extremely aggressive and hitting the open shots and challenging our defensive discipline by making the extra pass,” Florida State coach Leonard Hamilton said. “Then at the end, they hit their free throws.”

HARRISONBURG, Va. (AP) — Hunter McIntosh had 13 points as eighth-seeded Elon romped past ninth-seeded Towson 69-48 in the first round of the Colonial Athletic Association tournament.

Hyunjung Lee and Kellan Grady each had 13 points for the Wildcats (13-8). Luka Brajkovic had 10 points.

HARRISONBURG, Va. (AP) — Connor Kochera had 17 points as William & Mary topped UNC Wilmington 73-60 in the first round of the Colonial Athletic Association tournament on Saturday night.

Ty Gadsden had 15 points for the Seahawks (7-10). Joe Pridgen added 12 points and eight rebounds, and Mike Okauru had 10 points.