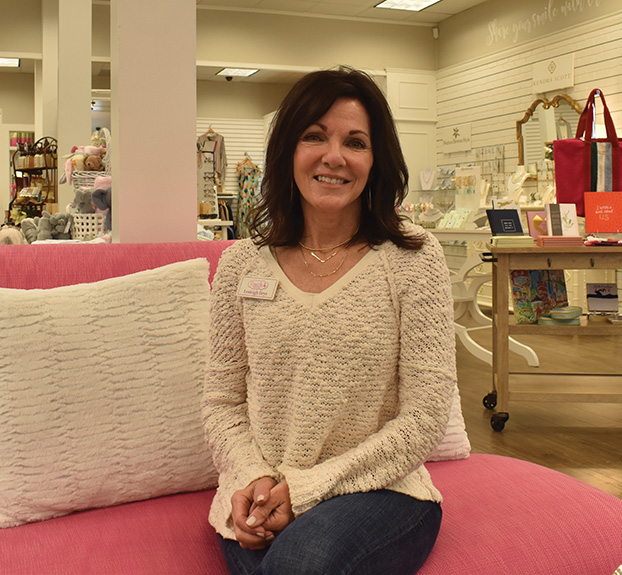 Lesleigh Drye has been running the day-to-day operations at Caniche since the store opened 15 years ago. Ben Stansell/Salisbury Post

SALISBURY — One of the most important decisions Lesleigh Drye has made in her life happened over a lunch of chicken salad pitas.

In the fall of 2005, Drye met with Missie Alcorn at Pockets Deli and Subs at what is now Palm’s Cafe on West Innes. The two women knew each other as acquaintances, but had never talked extensively. It didn’t take long for them to start swapping ideas about opening a store of their own in downtown — a lifelong dream for both of them.

By the time they asked for their checks, they’d decided almost everything but the store’s name.

“After talking at lunch one day we just said ‘Let’s go for it,’ ” Drye said.

A few months later in the spring of 2006, Drye and Alcorn opened Caniche at 200 S. Main St. in downtown Salisbury. Caniche, which means “poodle” in French, has been selling apparel, jewelry and fine gifts ever since and will celebrate its 15-year anniversary on March 27.

Alcorn said that owning Caniche has been “a good ride,” but it hasn’t been without its challenges. Having a recession take hold of the country shortly after opening the shop was especially difficult.

“It’s definitely a rollercoaster because we opened in ‘06 and the recession hit in ‘07,” Alcorn said.

Despite the downturn, Alcorn said that the shop pivoted and found its niche, which was affordable gifts and jewelry.

Not only has Caniche remained a fixture of downtown through the recession, but it’s also lasted through a pandemic.

“It’s been awful, but at the same time this town is so resilient and supportive,” Drye said. “I wouldn’t want to do it again, but it’s been awfully nice to see how this community was during such a yucky time. Having to be closed for six weeks, we actually fared pretty well.”

The key to the shop’s sustained success, Drye said, has been its adaptability.

“Staying power is just being willing to do what it takes, even if it means getting out of your comfort zone,” Drye said.

The store has undergone plenty of change in a decade and a half, including two major renovations. The upstairs of the shop has been everything from a tea room to the first home of The Lettered Lily, a graphic design studio that’s now located just around the corner. At one point, it was even where the children of the store’s staff spent their days after school.

Along with changing physically, the store has continuously adapted to the latest technology. After resisting the transition to online shopping for several years, Drye finally decided to open an online shop for the store during the pandemic.

“I can’t tell you how long I put off that website,” Drye said. “I never wanted to do it really because I love the shopping experience and having a relationship with customers. That’s what makes it great for me.”

When people were shopping online more often due to COVID-19, Drye knew the store had to go online.

“It became a reality that we had to do it, so we did,” Drye said. “It’s a positive thing. In this day and age, you almost have to have it.”

Caniche officially launched its website in November. Drye said that the shop’s customers have responded to it well. Although most of the business the store does online is still local, Caniche has received orders from across the country.

“When we get an order from California, we about do cartwheels in here,” Drye said.

Keeping its inventory up-to-date with the latest trends has been important too. For that, Drye and Alcorn have relied on input from their daughters. The two have also accompanied each other to markets in Atlanta several times a year, where they’ve picked out the shop’s future offerings together.

Caniche keeps its inventory fresh by cycling in new products seasonally, but the store has remained faithful to the core brands and products its customers have always loved. Candles, tumblers, books and cookies have been consistent best-sellers and hoop earrings and necklaces designed by Sheila Fajl have remained popular, Drye said.

When the Brazilian jewelry designer visited the store in 2017, Caniche rolled out the red carpet and hosted an event complete with cupcakes and custom shirts.

“We thought it was a really big deal when she came to visit us and did a trunk show,” Drye said. “She did that two years in a row and that was a ton of fun.”

Drye also described the 15 years as a “roller coaster” and said that it’s been almost all good. The store’s continued success, she said, is a result of the shoppers.

“We have a very strong, loyal customer base and we wouldn’t be here without them,” Drye said. “They’re amazing and we’re trying to grow it as much as we can.”

Caniche’s primary team has been Drye, Alcorn, Office Manager Jennifer Seifert and Sales and Marketing Manager Shakira Basinger, but many others contribute to the store’s prosperity as well.

To honor the anniversary, Caniche is hosting a celebration on March 27 from 10 a.m. – 5 p.m. The day-long event will feature refreshments and champagne toasts, gift card giveaways, door prizes given out hourly and 15% off an entire order all day. Jewelry designer Meghan Browne will be at the store from 11 a.m. – 2 p.m. selling limited edition products as well.

Alcorn said that she’s excited to celebrate the past 15 years and is ready to cheer the next 15.