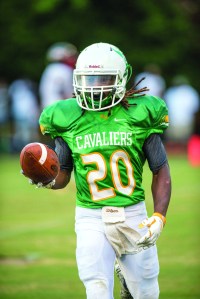 NORWOOD — North Rowan got down early at South Stanly on Friday, but wound up smashing the Bulls 44-18 for a Yadkin Valley Conference victory.

“Another slow start for us,” North’s first-year head coach Nygel Pearson said. “But once we got it rolling in the second quarter, we really got it rolling.”

The Cavaliers (2-0, 2-0) trailed 6-0 after Jaderian Smith broke a 44-yard scoring run for the Bulls, but by halftime, North was in control.

Zay Davis got North’s first score on a short run. QB Kyree Sims ran 8 yards for the TD that put North ahead to stay at 12-6. Sims’ 20-yard scoring pass to Amari McArthur made it 18-6.

Sims got his second rushing TD on a 10-yard carry and hit Kendrell Goodes with a 20-yard TD pass with 1:20 left in the first half. Ronnie Fennell’s 2-point conversion gave North a 32-12 halftime lead.

Davis scored his second and third TDs in the second half. He finished with a career game — 17 carries for 156 yards.

North amassed 289 rushing yards. Sims had 14 rushing attempts for 78 yards, and Jaharion Graham and Fennell chipped in with productive carries.

North was only 4-for-20 in the passing game, but connected for some explosive plays. Goodes had two catches for 52 yards, while McArthur had two for 42.

Drew Gaddy threw a TD pass to Malik Kluttz for the Bulls. Smith added another scoring run in the third quarter.

Neither team had much success with conversions.

Davis and Tyshaun Pratt had interceptions for the Cavaliers.

KJ Krider had three tackles for loss, while Tsion Delaney had two.

“Our defense really played well in the second half,” Pearson said.