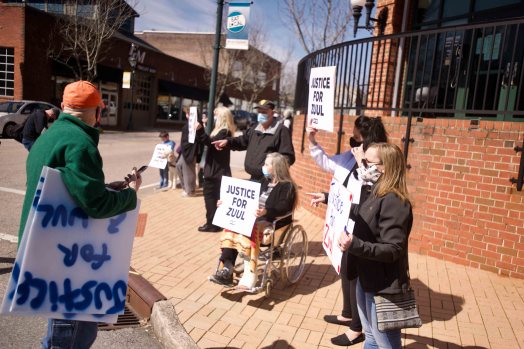 Carl Blankenship/Salisbury Post - Most of the sign were PETA branded, but some protestors came prepared with their own homemade signs. 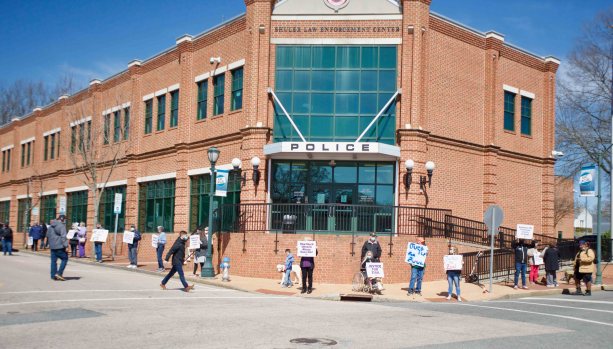 Carl Blankenship/Salisbury Post - Protestors lined up at Salisbury Police Department on the corner of Liberty and Lee streets.

SALISBURY — A small crowd of protesters gathered in front of Salisbury Police Department on Friday to speak out against the treatment of a K-9 in a video that has gone viral and made national headlines.

The protest was organized by the Virginia-based nonprofit People for the Ethical Treatment of Animals. PETA sent SPD Chief Jerry Stokes a letter condemning the contents of the video and pushing for further action on the part of the police department.

The video shows a SPD K-9 handler lifting Zuul off the ground by his collar. The officer walked the 4-year-old police German shepherd over to a police vehicle and slung it over his shoulder. Hanging by his leash, the officer slammed the dog into the vehicle before getting Zuul inside. He then strikes the dog.

Rachel Bellis, manager of local affairs in PETA’s Cruelty Investigations Division, accused Stokes of trying to sweep the incident under the rug Friday.

If it was anyone other than a police officer, Bellis said, the person in the video would be charged with cruelty to animals. She said the people in the video talking about turning off their cameras should be investigated as well.

“There is so much outrage about this case that we wanted to come down and show our support for Zuul,” Bellis said.

Judy Carlson, who lives in Salisbury and came out to protest, said the video was horrid.

“If our police who we expect to protect us can’t protect the animals without a voice, why are they police?” Carlson said.

Carlson, a cat lover, said she has never owned a dog, but they still need a voice.

Carlson said she would like to see the officer in the video stop working with animals and receive additional training.

“I hate to say that the gentleman should lose his job because I’m certain he’s got a family to feed and everything, but he should have thought of that before he mistreated a living being without a voice,” Carlson said.

Jenn Sciortino, who also lives in Salisbury, said Zuul is a police officer. As part of his duties, Zuul is asked to potentially lay down his life.

“You don’t ever, ever treat a living being that way,” Sciortino said, adding the video made her feel sick.

Sciortino said she thinks the officer needs to be stripped of his badge and prosecuted.

Shortly after the protest, Salisbury Police tweeted a pair of photos of Zuul saying he is “in good hands, happy and healthy, and taking some time off.”

The department’s K-9 operations are being investigated by an “outside agency,” according to the department.