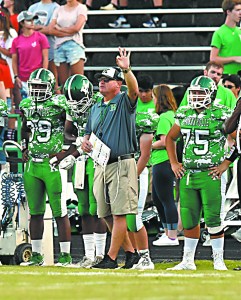 Ty Woods kicked the decisive PAT in the second overtime to give the Wonders a rousing 30-29 victory.

Central needed only to kick a PAT to win the game in the first OT and topple A.L. Brown for the third year in a row, but the Wonders blocked the kick to stay alive.

Defenses dominated a scoreless first half.

The Wonders (2-0, 2-0) broke through with a 40-yard scoring run by Jamison Flowe in the third quarter.

The Wonders scored briskly in the first OT, with Flowe barreling into the end zone on first down.

Central scored a touchdown with the aid of a penalty that took the ball to the 5 and had victory in its grasp, but the PAT kick was rejected, as Wonders crashed right up the middle.

Central had the ball first in the second overtime and Elijah Horton scored for a 29-23 lead, but the Wonders stopped a 2-point conversion attempt.

Then the Wonders scored and tacked on the decisive kick by Woods.

The Wonders play at home against Cox Mill, which fell to West Cabarrus, next week. Central Cabarrus has a non-conference game against Providence.