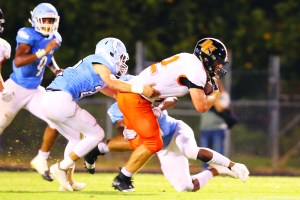 MOCKSVILLE — West Rowan took some small strides forward in Week 2, but the Falcons were still no match for Davie County.

The War Eagles ended a two-game losing streak to West with a convincing 35-7 victory.

It was 35-0 in the fourth quarter when Akin Robinson broke a 64-yard scoring run for the first points of the season scored by the Falcons (0-2).

Tate Carney produced his second straight four-TD game for the War Eagles (2-0). He didn’t punch out massive yardage, but he had scoring runs of 2, 9 and 1 yards and grabbed a touchdown pass from QB Alex Summers for the War Eagles’ final TD.

West battled to a scoreless first quarter. The Falcons had a chance to score first, but  Willie Purvis intercepted a pass in the end zone.

The turning point was a diving interception by Caleb Bowling that gave Davie the ball at the West 45 when it was still scoreless. That short field led to Summers connecting with Zymere Hudson for a 7-0 lead.

Davie quickly made it two touchdowns in two minutes with a fumble recovery by Justin Hayes and Carney’s first TD for a 14-0 halftime lead.

The backbreaker for the Falcons was Davie converting on third-and-17 from its own 29 and driving for the score that made it 21-0 in the third quarter.

Another West fumble handed Davie another short field, and Carney cashed in for a 28-0 cushion.

The statistical standout was Summers, who was 22-for-30 passing for 209 yards and two TDs. He threw one interception.