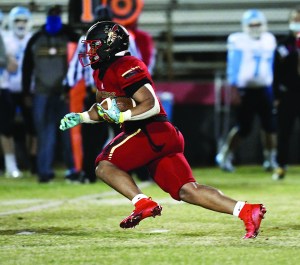 North Rowan will play another Yadkin Valley Conference opponent on the road. The Cavaliers are at South Stanly.

East Rowan has located the most unusual opponent. The Mustangs, were originally scheduled to play West Stanly, and then briefly had West Meck as a replacement team. Now the Mustangs are on the road at Thomas Jefferson Classical Academy.

While most sources list TJCA as being in Mooresboro, we’re told the accurate dateline for TJCA athletics is Avondale, a small community in Rutherford County. The school is about 16 miles west of Shelby.

There are a wide variety of start times on Friday, everything from 6 p.m. to 7:30 p.m. East’s game will kick off at 6. A.L. Brown at Central Cabarrus is also set for 6.

Salisbury, North Rowan and Carson plan to get started at 6:30. The Hornets say they’ll stick with 6:30 for all home games.

North Rowan-South Stanly, A.L. Brown-Central Cabarrus and West Rowan-Davie appear to be watchable if you subscribe to the NFHS network.

Oak Grove took it on the chin from 4A bully West Forsyth in its non-conference opener, 44-21.

Salisbury pounded West Rowan 36-0. West was missing three studs, but the magnitude of the Hornets’ victory was still impressive.

Salisbury got huge rushing games from JyMikaah Wells (149 yards) and QB Vance Honeycutt (132), while the defense held the Falcons to 90 yards.

Running back Aiden Shewcow is the workhorse for Oak Grove. West Forsyth held him to 86 yards on 25 carries.

To beat Oak Grove, you have to contain Shewcow, and make the Grizzlies put it in the air. West Forsyth forced the Grizzlies to throw 22 times and picked off two aerials.

South Stanly’s Bulls threw effectively last week, with freshman QB Drew Gaddy getting 211 yards and three TDs through the air. Gaddy also rushed for 93 yards and a score, while Devin Green had 106 rushing yards on 11 carries.

North got a nice game from QB Kyree Sims. He didn’t have any TD passes, but he ran for 120 yards and two TDs and threw for 132 yards.

A concern for North is health. Running back Ronnie Fennell is banged up, and DB Jyrik Scott and linebacker Khalil Davis are out.

North Rowan is 6-1 all-time against South Stanly and has won big in the last two meetings. North won a squeaker in 2017.

East Davidson opened with a 9-0 win against West Davidson in a game between CCC teams that was designated as a non-conference contest.

South is coming off a lopsided opening loss to Carson, but has a chance to win its CCC opener.

South QB Nathan Chrismon was held to 18 rushing yards by Carson, but is capable of a big night.

The Raiders wiped out East Davidson 35-0 in 2019 for one of their two wins and they’ve taken the last two meetings with the Golden Eagles.

East Davidson won the first meeting of the programs in 2017.

West figures to look more like West this week, now that the basketball players are on the field.

West can use those reinforcements against a Davie squad that looks formidable.

Tate Carney had 195 rushing yards and four TDs on opening night and will be the workhorse for the War Eagles.

Davie doesn’t have highly recruited QB Nate Hampton, who opted to enroll early at Liberty University, but his replacement, Alex Summers, was good last week. He threw a pair of touchdown passes to Charlotte-bound Jack Reynolds, one of the top receivers in Davie history.

Davie returns its top five tacklers from last season, so the War Eagles should be tough to move the ball on.

This is almost always an entertaining game,. All the tickets were quickly sold that were allowed to be sold.

Are this year’s bigger and stronger Cougars headed in a different direction? They’ll try to prove they are on Friday.

Mount Pleasant is solid and fundamental and managed to beat East Rowan 20-14 last week. East controlled the action for a long time and dominated time of possession, but Mount Pleasant hung in there, took advantage of turnovers and kicking game mistakes and overcame a two-TD deficit.

Carson had its way on both sides of the ball against South Rowan, winning 41-0, the first shutout for the Cougars since the 2010 season.

Carson ran for 207 yards in Week 1, with CP Pyle (85 yards) in the workhorse role. Jordan Garland and Carter Dowd scored two TDs each. Alex London threw a touchdown pass and ran for a score.

Mount Pleasant’s defense is good and shut out East Rowan in the second half.

Offensively, QB Ryan Tyson is the playmaker for the Tigers. He had two passing TDs and a rushing TD against East.

East had to work to find a game for this week, but TJCA lost its opponent (Highland Tech) to COVID and was happy to step in.

Founded in 1999, TJCA is 1A, but this figures to be a challenging game for the Mustangs.

Isiah McMullens was a workhorse for the Gryphons in the opener. He carried 20 times for 130 yards and a TD. He’s 190 pounds and also plays linebacker.

Bryce Jergenson threw it efficiently in Week 1 with 11 completions, 120 yards, one TD, no interceptions.

East led a 14-0 lead slip away against Mount Pleasant, mostly because of turnovers.

If East can clean up the mistakes, it has a chance to be good. Running back Sammy Pinckney is a handful for defenses to deal with, and other than one bad minute, East’s defense played well last week.

It goes without saying that this is the first meeting of the programs.

The Wonders smacked Northwest Cabarrus 51-19 in their SPC opener, while Central eked out a 23-22  decision against Concord in the debut of new head coach Zach Bevilacqua, who used to be on the West Rowan staff. Central won on a 2-point conversion in overtime.

A.L. Brown got two TD passes from Cam Kromah in a dominant opener, while an army of backs plowed for 236 rushing yards. Jamison Flowe put the ball in the end zone twice.

While the Vikings have won thrillers the past two seasons, the Wonders lead the overall series 25-2.