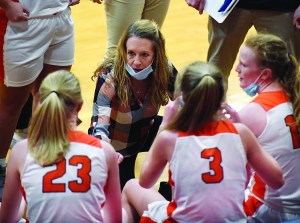 Carson head coach Brooke Stouder with some encouragement for the Cougars. Photo by Wayne Hinshaw, for the Salisbury Post.

CHINA GROVE — Asheboro will bring an experienced team and an experienced head coach into Saturday night’s game with Carson for the 3A girls basketball championship.

Asheboro head coach Don Corry, 73, is a living legend. He’s in his 33rd year as a head basketball coach, including some time spent in the boys ranks. He’s coached powerhouse teams at Southwestern Randolph, Lexington and East Davidson during a remarkable career and surpassed 700 wins during this shortened season.

Corry’s Lexington boys and East Davidson girls had their battles with Rowan schools, mostly with Salisbury.

Corry “retired” briefly from East Davidson after the 2019-20 season, but quickly landed at Asheboro (this is his second stop there) when the Blue Comets needed a new coach after David Hayes left to be a football coach at Thomasville.

The Comets are 15-0 this season, including two forfeits.

The championship game is set to be played at Providence Grove High, in Climax, about 16 miles north of Asheboro. Tip-off time is 6 p.m.

There will be streaming and viewing options for the people back home.

No tickets are being sold at the door. Both schools received an allotment of tickets from the NCHSAA, but it will probably have the feel of a road game for Carson, which is 63 miles from Providence Grove.

Both teams are looking for their first state title in girls basketball. Carson, which was 3A volleyball runner-up twice, is seeking the first team-sport state championship in school history.

Head coach Brooke Stouder has been at the helm of the program since the school opened in 2006. She’s coached 234 victories.

Carson shoots better than 60 percent on free throws and shoots 3s (38 percent) nearly as well as it does 2s.

Carson’s experienced roster has been around a while and is well-known. There’s no monster scorer, although senior Colbie Perry, a Converse signee who does most of her damage from the 3-point line, is averaging 14.6 points per game.

Senior Carleigh Perry, who was stopped by two ACL injuries early in her high school career, averages a modest 8.4 points, but that’s due mostly to Carson’s steady diet of blowouts in the regular season.  She’s been phenomenal on the boards at 5-foot-8 and has shot a terrific percentage in the playoffs. She’s scored in double figures in five of her last six games and could be the pivotal player in this one.

Junior Hannah Isley gives Carson a driver to complement the shooting of Colbie Perry and Wilhelm. She averages better than 10 points per game.

Senior Lani Isley is a floor general. She won’t score often, but she’s a critical player on both ends of the floor.

The Isleys are sisters. The Perrys are first cousins.

None of those five girls stand taller than 5-foot-8, but they negate size disadvantages by beating opponents down the floor.

Carson is 18-0 for a reason. Lots of defense and the Cougars get good shots on offense. It’s an extraordinarly cohesive group that plays well together on both ends.

Mary Spry, a 6-foot junior, averages better than 12 points points per game and scored 21 points in the North Piedmont Conference championship game. She has the highest ceiling of all the Cougars as far as college ball, as she has mobility and skills to go with her size. She’s second on the team in scoring and rebounding.

Spry has been rehabbing and may be able to play some Saturday. It would be a nice option for Stouder to have, if Spry is able to go.

The first girls off the bench are usually senior Kary Hales, an undersized forward who hustles and claws, and senior Jaden Vaughn, who is about 5-foot-10 and gets the Cougars some rebounds.

While they are seniors, neither Hales nor Vaughn, played basketball last season. They’re good athletes. Vaughn is headed to Lenoir-Rhyne for volleyball. Hales plans to play volleyball and softball at Catawba. They’ve been critical to Carson’s depth, especially after Spry went down.

Asheboro will start four seniors and a freshman.

Senior center Diamond McDowell, 6-foot-1, is the standout. She averages 20.4 points and 11.9 rebounds per game. She had 22 and 18 in Asheboro’s 10-point win against previously unbeaten Northwood in the East Region final.

Like Carson, Asheboro had to fight through two difficult playoff games to get to the regional final. Asheboro had to beat Eastern Alamance and Conley in close games. McDowell responded with huge efforts when the Blue Comets needed them. She’s turned in double-doubles in her last eight games.

Senior guard Tanaesha Tellison isn’t as consistent as McDowell, but she’s a dangerous second scorer who can go off. She averages 15.2 points and 6.2 rebounds. She’s scored 20-plus three times.

Senior guard Janiya Jackson is primarily a ball-handler and defender. She chips in with 5.7 points and a team-high 5.3 assists per game.

Senior Ashton Maness is a shooter. Most of her 8.9 points per game come from the 3-point line. Carson doesn’t want to foul her. She’s shooting 83 percent on free throws.

The non-senior in the lineup is 5-foot-10 freshman Sion Murrain, who averages 9.9 points and is a strong rebounder. She came through with 19 points in the 59-56 win against Eastern Alamance.

While McDowell looms as the toughest obstacle for the Cougars, Asheboro is in this game because all five starters are capable players. It’s hard to help on McDowell because any of the five can have a big night.

Freshman Ellen Long is the sixth person. Corry used only six players in the regional final.

As far as potential weaknesses, Asheboro turned it over 21 times in the regional final. Carson usually excels at creating turnovers and in scoring off of them.

Asheboro shoots 51 percent from the foul line as a team. McDowell is at 57 percent. Three starters are at 50 percent or below. That could be a factor in a tight game.