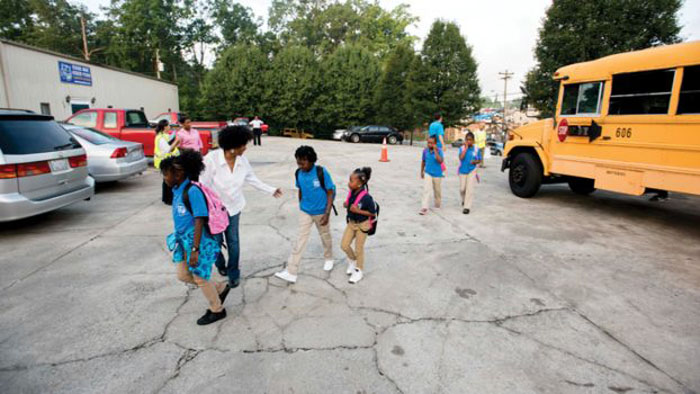 EAST SPENCER – The State Board of Education on Thursday upheld its January decision to revoke the charter for Essie Mae Kiser Foxx Charter School, and the school’s board is now considering seeking other legal recourse.

Essie Mae Board Chair Tina Foxx Wallace said the school’s board will meet with its legal representation to discuss its next steps.

“We will continue to fight this because we stand by our initial response,” Foxx Wallace said.

Foxx Wallace said the board was hoping for a different decision based on the facts of the case.

As of now, the charter will be required to close at the end of this school year. The state board had no questions or comments about the issue during its Wednesday and Thursday meetings. It approved the revocation as part of a batch of action items on Thursday. The charter school began operation in 2018 and held its first classes in August of that year.

The board’s decision was based on the recommendation of a review panel that looked at the cases’ factual findings and met with the charter school’s leadership on Feb. 17.

The decision by the review panel, the recommendation to revoke the charter by the Charter School Advisory Board last year and a presentation to the state in January all cited failing to submit required financial audit reports for its first two years of operation. The first audit report was received on Dec. 9 — 13 months late. The second audit report had still not been submitted when the review panel report was completed, according to a letter about the panel’s findings.

The letter from the panel says Essie Mae representatives admitted to the problems outlined by the state at a Feb. 17 hearing, “then proceeded to blame others for the failings of the school.”

“Those blamed included its initial management company, its previous school administrators, its auditors and even its students,” the panel’s letter states. “They also blamed their own lack of experience, saying ‘we’re not professionals.’ The panel members were extremely concerned about the lack of understanding and contrition on the part of the school officials.”

School leadership previously laid blame for the late audits on its former management company, Torchlight Academy, with which it severed ties, and the accountant it hired after the split. The school’s board took on legal counsel after the Charter Schools Advisory Board decision and hired a new accountant to complete the audits.

The school’s problems began early. In June 2018, the school’s board was required to appear before the Charter School Advisory Board after finding insufficiencies in the school’s Ready to Open Progress Report. The Department of Public Instruction found issues with student enrollment, funding documentation and the lunch program.

The CEO of the school’s then-management company met with the advisory board and offered assurances the issues would be corrected. The school had a month to fix the issues. In August 2019, a letter was sent to the school stating there were still issues. The state board had accepted the advisory board’s recommendation the school was ready to open in July.

The charter split with Torchlight in September of 2019 with state board approval.

In 2019, the state found the school noncompliant with the requirements of the Individuals with Disabilities Education Act, the school was placed on governance noncompliance for not being able to “clearly articulate the school’s financial position and operating budget” and a testing irregularity with the 2019 BOG3 English Language Arts/Reading Test.

In September 2019, the school’s board appeared at a Charter School Advisory Board meeting. Then, advisory board members “expressed concerns about the financial status of the school following the board’s inability to answer questions about the budget.”

The school’s leadership also said it had not contracted an auditor or begun the process.

The school has been through a handful of leadership changes in its short history.

In February 2020, the state reached out to offer support to then-principal James Fisher.

In March 2020, an email was sent to the school’s principal concerning a school improvement plan that was three months overdue. The school was identified as low-performing during the 2018-2019 year, and performance data was not collected for the 2019-2020 year because of the COVID-19 pandemic.

The school is named for Essie Mae Kiser Foxx, a community icon in East Spencer who died in 2016. A street in the town, Essie K. Foxx Lane, was named after her in 2015.

Rowan-Salisbury Schools Assistant Superintendent of Transformation Andrew Smith said it is early, but the district’s open enrollment will begin in April and its goal is to make families aware of education options available to them.

“Kids are kids,” Smith said “We want to make sure they have the resources to be successful.”

Smith said students from Essie Mae, including a number who were previously enrolled in RSS, will have the option to enroll at the school near where they live.

Faith Academy, a new charter school planning a fall opening in Faith, ended its lottery application period on Feb. 28, though the school’s board chair George Wilhelm said students can still be placed on the school’s wait list.