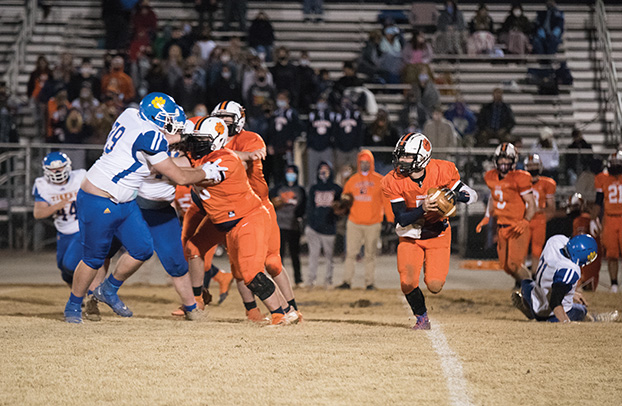 CHINA GROVE — Needing a big play on fourth down with the game on the line, Alex London launched the ball down the field toward wide receiver Emory Taylor.

Tipped first by the cornerback, the football eventually fell to the grass and Carson High School’s comeback bid was officially over. With just 1:30 left on the game clock, Mount Pleasant got the ball back and kneeled it three times to seal a 27-21 victory over the Cougars on a chilly Friday night.

Despite shutting out Mount Pleasant (2-0) in the second half and making a few explosive plays on offense, Carson (1-1) couldn’t overcome an early deficit in the home loss.

Even though the loss stings, Carson head coach Daniel Crosby was inspired by the fight his team showed.

“I couldn’t be more proud,” Crosby said. “It was 27 to nothing and we get a chance to win right there at the end of the game.”

After two quarters of action, it looked as if the visiting Tigers were going to steamroll the Cougars.

Mount Pleasant jumped out to an early 7-0 lead on the second play of the game, when running back Dalton Miller broke loose and raced 44 yards to end zone.

“Through a scrimmage and one game, we hadn’t given up much on defense and then we gave up that big play early in the game and we got shellshocked a little bit,” Crosby said.

Miller scored twice more in the first half, on an 8-yard run later in the first quarter and on a 9-yard scoring jaunt early in the second. He carried the ball 24 times for over 150 yards in the game.

The Tigers extended their lead to 27-0 with 3:54 left in the first half when quarterback Ryan Tyson connected with Max White on a screen pass and the wide receiver scorched 81 yards down the field to the end zone.

“Early in the game we were getting up the field too much on the pass rush,” Crosby said. “The quarterback had some lanes and pulled it down. We tried to get after him there when it was 20-0 and change the game and brought a lot of pressure and they hit us on the screen for the big touchdown. That’s on me.”

At that point, nothing was going right for the Cougars.

“I didn’t envision us spotting them 27 points,” Crosby said. “We had a fumble, we missed a few responsibilities on defense early in the game. Our kicking game was not good.”

It looked as if Carson was going into halftime scoreless until Hunter Burris intercepted a Tyson pass and set the Cougars up with great field position deep in Mount Pleasant territory. The interception was preceded by two major sacks, one by Jake Ross and the other by Andrew Rollins.

With just 41 seconds before halftime, London sparked his team by throwing a dart to Weston Lee near the end zone. The wideout managed to twist his body over the goal line, making it 27-7 and giving his team a much-needed boost.

Carson looked to build on that when it received the kickoff to start the second half, but a fumble on the Cougars’ first play from scrimmage gave Mount Pleasant the ball at the 20-yard line. Although the Tigers were knocking on the door, Carson’s defense didn’t let them in and forced a turnover on downs.

The Cougars defense continue to shut down the Tigers throughout the remainder of the game, getting consistent pressure on the opposing quarterback and limiting big plays. After giving up 27 points and over 200 total yards in the first half, Carson limited Mount Pleasant to just over 50 yards in the final two quarters and didn’t give up another point, completely shutting down Mount Pleasant’s passing attack.

“We didn’t make any adjustment or change anything, we just played our game,” Crosby said.

London found Jacob Harris with a touchdown pass over the middle on Carson’s next drive to cut the lead to just 13 points. London threw the ball over 30 times for 185 yards and two touchdowns on the night.

Neither defense let up much until Carson running back Jordan Garland bulldozed his way into the end zone from a little over 2 yards out to bring the score to 27-21 with 4:37 left in the fourth quarter.

After Carson’s defense stopped Mount Pleasant on fourth down to give its offense one last chance with 2:47 left, the Cougars threw four incompletions and gave the ball back to the Tigers to kneel it out.

“I’m disappointed we lost, but we’re going to learn from this,” Crosby said. “We’re going to get where we want to be as a football team.”

Carson (1-1) will travel to play North Iredell in the team’s first conference game of the season next week. Mount Pleasant will host the Central Academy of Technology and the Arts.