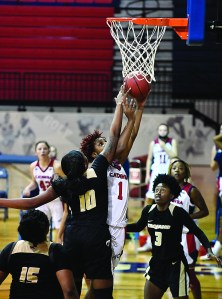 Three COVID pauses severely limited the number of games Catawba has been able to play.

Catawba’s forte has been a high-pressure defense led by quick guards Shemya Stanback (A.L. Brown) and Lyrik Thorne.  The Indians are first in the SAC in steals per game, turnover margin and turnovers forced per game. They were able to force 15 turnovers on Thursday. Catawba committed 13.

Tusculum had zero second-chance points, but shot 43.8 percent from the field and was a deadly 9-for-15 from the 3-point line.

Catawba had a 13-4 edge in offensive rebounds and had nine second-chance points.

Janiya Downs (South Rowan) came off the bench to score 18 for the Indians. She shot 6-for-12 and made two 3-pointers.

Thorne made Catawba’s other two 3s.

Stanback scored 11, while Thorne had 10.

Catawba’s last lead was at 12-10 in the first quarter.

Catawba got back within three points in the third quarter and was never out of the game, but the Pioneers prevented the Indians from going on one of their patented runs.

Catawba, which lost 68-61 to Tusculum in Salisbury, will hope for a regional bid.

Catawba is one of four SAC teams, along with UVa-Wise, regular-season champ Carson-Newman and Tusculum listed in the Southeast Regional rankings.

Other stout teams in the region include Belmont Abbey, Barton, Tuskegee and Emmanuel.