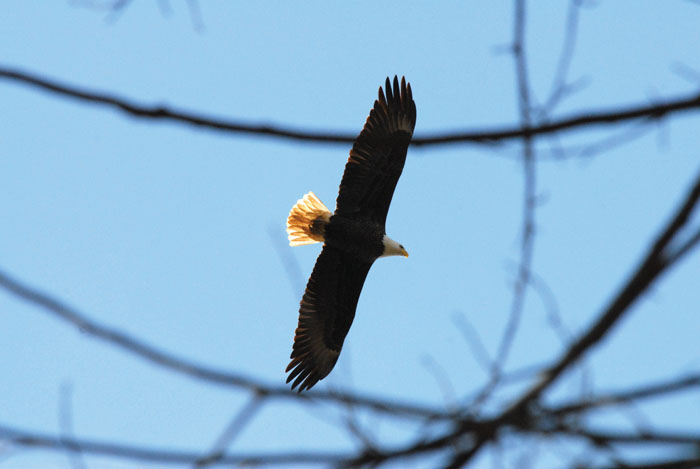 Photo courtesy of Duke Energy One of the Buck Steam Station eagles take flight in 2015.

SALISBURY — The eagles have flown the nest at Buck Station.

Since at least 2013, a male and female bald eagle pair lived and raised their young at the top of a soaring loblolly pine within eyesight of Duke Energy’s Buck Combined Cycle power plant and the former Buck Steam Station. The massive nest, which hatched about two eaglets per year until 2018, was located near the end of a thumb-shaped peninsula that juts out into one of three coal ash ponds on the site.

While on an observational mission last week, Duke Energy Lead Environmental Scientist Misti Sporer confirmed her suspicions: the nest is no longer in use.

“Our final checks showed that the nest was inactive and had started to decay out of the tree,” Sporer said.

Sporer observed the now-empty and deteriorating nest from her own mobile perch — a helicopter hovering high above the tree line.

The formerly active eagle’s nest was the first and most northern stop on an aerial trip for Sporer, who spent most of last Thursday surveying eagle habitats near Duke’s hydroelectric facilities along the Yadkin-Pee Dee Basin from Lake Tillery to Blewett Falls.

Ensuring that Duke’s energy production doesn’t disturb avian life is what Sporer has been charged with since she was hired by the company six years ago.

“I oversee all aspects of what Duke does to how it may impact birds,” Sporer said. “Anything from little, tiny songbirds all the way to bald eagles.”

Before coming to North Carolina, Sporer worked in a similar role for a power company in the western United States. As an environmental scientist, she helps energy companies strike a balance between protecting wildlife and operating a profitable business.

When Sporer was hired by Duke in 2015, she ramped up the company’s surveillance of the eagle’s nest at the Buck site. About six or seven times during the eagle’s nesting season, which lasts from late November to early June, Sporer would venture to the site in the pre-dawn light to observe the nest from a healthy distance. She grew accustomed to watching the two eagle’s perform their morning routine, which she said usually consisted of stretching and breakfast.

One of the first major signs that the nest had been vacated came a few weeks before Christmas on one of Sporer’s scouting trips. 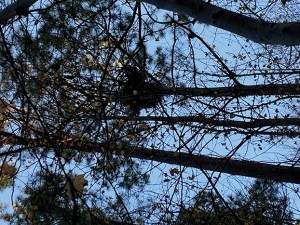 This photo, taken in Dec. 2020, shows what remains of the nest near Duke Energy’s Buck Combined Cycle Plant and coal ash recycling facility that a pair of bald eagles called home for several years. Photo submitted.

Even though nesting near a coal ash pond might not seem like an ideal spot for an eagle, Sporer said that the location was perfect for America’s most beloved bird of prey.

“Eagles in the Southeast typically like to nest within 200 feet of water,” Sporer said. “Generally speaking, they like to have lakefront property, a condo on the lake. That’s their natural ecology.”

The proximity to the Yadkin River, which guaranteed prime fishing, seemed to outweigh the industrial activity nearby for Buck’s eagle duo.

When Duke began demolition of the old coal-fired plant and construction of the new coal ash recycling center on the property, it obtained a five-year eagle disturbance permit from the U.S. Fish and Wildlife Service issued on June 22, 2017. The permit requires the company to monitor the site and report observations back to the agency. Most of the information in the reports have come from ground-level trips made by Sporer, but several have come from helicopter visits and drone observations.

Protecting bald eagles has been at the forefront of America’s conservation strategy since the passage of the Bald and Golden Eagle Protection Act in 1940.

The two eagles and their eaglets, Sporer said, never seemed to mind the construction activity required to build the recycling center, which recently started recycling the coal ash from the three ponds. They also didn’t seem to worry about the noise already coming from the Buck Steam Station site and the nearby interstate.

“It’s not by any means a peaceful and quiet patch of the woods,” Sporer said. “You can hear 85. You can hear trucks as they go by 85. This pair is accustomed to light industrial noise.”

The problems that may have led to the abandonment of the nest, Sporer said, seemed to start with several rough storms in the summer of 2019.

“We had a couple of really bad summer storms that came through and tore the nest apart,” Sporer said. “That fall, when the adults came back, the 2019-2020 breeding season, the adults came back and re-built the nest, but they had a really rough winter. It was really rainy and really cold.” 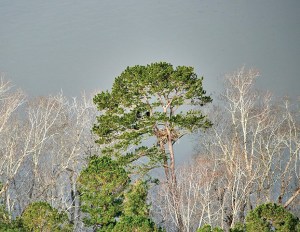 A bald eagle perches in a tree along the Yadkin River. Photo submitted.

Sporer said those difficult conditions likely resulted in a “natural nest failure” the following spring when no fledgling baby eagles were observed.

“When they return back to the nest and it’s not on a body of water like they are used to, hundreds of thousands of years of evolution have triggered the eagle to say. ‘Hey, maybe this isn’t the place for me anymore,’” Sporer said.

Even though the nest has been abandoned, Sporer will continue to monitor it, and Duke will not disturb it for at least three years in case the eagles decide to return to their old stomping grounds.

Sporer resists becoming too attached to any of the eagles she monitors, but she did say that she’s sad to see the pair at Buck Station move on.

“You kind of enjoy watching the pair,” Sporer said. “Birds are quirky. They have their own pair dynamic. The longer you observe the pair, the more you recognize a pair dynamic. You get a little bit melancholy when you don’t get to see that pair as routinely.”

As for the eagles, she’s not too worried.

“They’re off being eagles somewhere else,” Sporer said. “I’m confident that they’re doing just fine elsewhere. That in and of itself is kind of unique. Wildlife is transitory. It’s not a permanent thing. Being able to see them when you do should be kind of a nice little gift.”