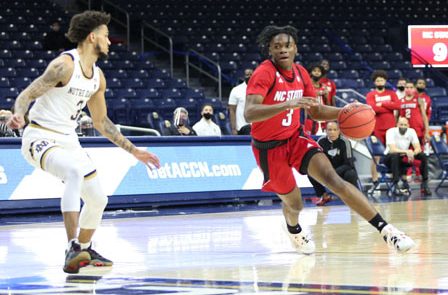 Jericole Hellems added 13 points for the Wolfpack, who have won the last four meetings against Notre Dame.

The Wolfpack built a 40-32 halftime advantage, opened the second half on a 16-7 run and led by double-digits for nearly the rest of the way.

Gray scored in double figures for an 11th straight game for the Seminoles (15-4, 11-3 Atlantic Coast Conference), who are in position to win the league’s regular-season title with a win at Notre Dame on Saturday.

Walker scored 12 points in the first half as the Seminoles cruised to a 53-35 lead at the break and were never challenged.

BC shot 22 of 60 (36.7%) and 12 of 31 (38.7% from 3-point range.
Florida State started five seniors in what was their final home game. Senior guard RayQuan Evans scored six points and because of the unique lineup the Seminoles’ bench had a 78-13 advantage over BC’s reserves.

The Seminoles are 40-12 in the ACC the last three seasons.

SYRACUSE, N.Y. — Alan Griffin hit three straight 3-pointers to score nine of his 22 points in just under three minutes on Wednesday, as Syracuse opened the second half on a furious 15-2 run to break away from Clemson for a 64-54 win.

The Orange (15-8, 9-7 Atlantic Coast Conference) hit their first six shots of the second half, including three from distance, while Clemson (15-6, 9-6) was 1 of 4 shooting. The teams had ended a cold-shooting first half with Syracuse ahead 25-22.

In less than four minutes, Syracuse made it a completely different game, doubling its field goal percentage from 25% in the first half to 50% in the second. The Orange only turned the ball over once in the second half, Griffin was on his way to his fifth double-double of the season with 10 rebounds to go with the 22 points, and Buddy Boeheim tossed in 17.

The game was a makeup, originally scheduled for Jan. 12. Griffin’s double-double was his first since Jan. 23. Seven of his 10 rebounds were on the defensive end. Syracuse ended the regular season 13-1 at the empty Carrier Dome.

Al-Amir Dawes and Alex Hemenway scored 11 points each for Clemson, which saw a five-game win streak end. Each also made three 3-pointers. The Tigers finished the game shooting 39% (20 of 59). Nick Honor, who averages 9.1 points per game. was held scoreless for the first time since Clemson lost 54-50 to then-No. 25 Louisville on Jan. 27.

Alex Caldwell had 11 points for the Eagles (4-8, 2-5), who have now lost five consecutive games. C.J. Keyser added 11 points and six rebounds. The Rattlers remain undefeated in three games against the Eagles this season.

Swartz matched her career-high with four 3-pointers and the career 72% shooter from the foul line made 15 of 16 free throws, the first time she shot more than seven in a game. Makayla Dickens had three 3s and 11 points for the Eagles (7-11), who play fifth-seeded Syracuse today.