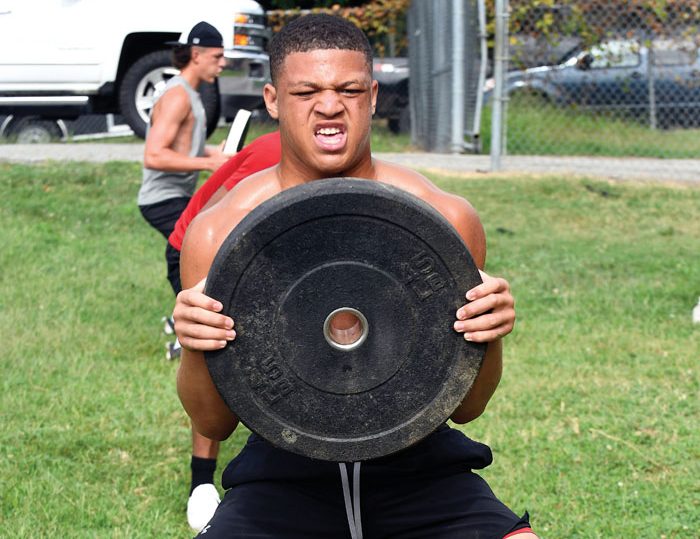 Salisbury High‘s Jaden Gaither works out in the offseason as the football team was divided into three groups for exercises using 45-pound weights. File photo by Wayne Hinshaw

West played short-handed — no Zeek Biggers, no Noah Loeblein, no Josh Noble — but the Hornets’ dominance in ending the Falcons’ five-year, 17-game county winning streak was still eye-popping and eye-opening.

The Falcons were 0-for-10 on third-down conversions, as a swarming Salisbury defense that pitched five shutouts in a state runner-up season in 2019, went right back to work. The Hornets didn’t miss a beat.

Salisbury’s all-world outside linebacker Jalon Walker, who will be announcing his college destination on March 28,  accounted for four sacks and a safety, while experienced linemen Zae Clay and Brandon Broadway had four QB pressures apiece.

Still, it was Gaither, a star in the making, who had SHS head coach Brian Hinson jumping up and down.

“Opening kickoff, first play, Gaither gets down the field and blows up their return,” Hinson said. “Jalon cleaned it up, made the tackle, but Gaither made the big hit.  You talk about a tone-setter. That play did it for me.”

Salisbury’s state-championship game loss to Shelby at Wake Forest had occurred back on Dec. 14. Gaither had been stellar in defeat as a young sophomore on the big stage, posting a team-leading 11 tackles against the Lions.

“We got down against Shelby, so I was just flying around, trying to have some fun,” Gaither said.

Gaither and his teammates had to wait more than 14 months before they got a chance to play again when West Rowan visited Ludwig Stadium.

“I’d waited for more than a year, so I had all this energy built up,” Gaither said. “It showed on that kickoff.”

It showed several times. Gaither had four tackles for loss, plus three assisted tackles, on the 38 snaps he played. Some of those TFLs came on violent collisions at the point of attack. Some came from sprinting around the edge and chasing people down in the backfield.

“I was usually lined up across from the tight end and sometimes a guard would pull and try to get to me,” Gaither said. “They tried to run the ball a lot, but it wasn’t as challenging as we expected. By halftime, we knew we had it.”

Gaither paid some dues. He was a jayvee for more than half of the 2019 season. Then he got promoted and helped the Hornets get on a roll in the playoffs.

“I worked so hard on the jayvees, so it was  thrill when they bumped me up to the varsity,” Gaither said.

He wasn’t just bumped up to provide depth. He made an impact.

“We moved Jaden into a starting role, and he never looked back,” Hinson said. “Even against Shelby, he stood out.”

Gaither competed at 183 pounds in 2019, so he’s significantly stronger after more than a year of weight training. That’s one constant of this COVID-delayed season. Many young players are larger and more physically mature now than they would’ve been back in the fall.

Gaither is still listed on the Hornets’ roster as a tight end/linebacker, but he doubts that he’ll see much action on offense.

“Defense is my job,” Gaither said.

With Salisbury’s electrifying playoff run of 2019, it’s easy for fans to forget that Oak Grove was the CCC champion, not Salisbury. But Oak Grove remembers, and Salisbury definitely remembers the loss at Oak Grove that was the biggest regular-season disappointment of 2019.

“Big game, and it’s a game we’ll be ready to play,” Gaither said.

Right from the kickoff.