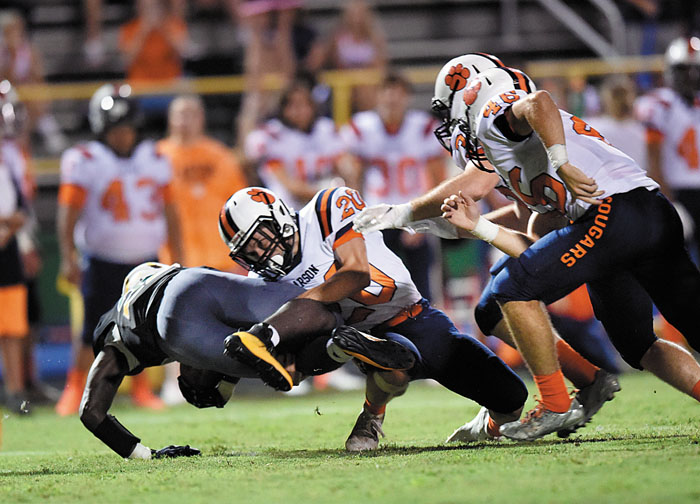 Carson’s Aaron Bradshaw (20), bringing down a North Rowan runner in 2019 when he was a 145-pound linebacker, has now bulked up to a solid 200 pounds. File photo by Wayne Hinshaw, for the Salisbury Post

CHINA GROVE — Carson senior Aaron Bradshaw is the first admit he took a pounding in the fall of 2019.

He was a 145-pound linebacker. That’s asking for trouble.

“It wasn’t really fair to him, but he was the best option we had,” Carson head coach Daniel Crosby said. ‘He took a physical beating.”

Like the guy in the old advertisement, Bradshaw got tired of having sand kicked in his face. He made a decision to transform his body.

“I realized I wasn’t big enough,” Bradshaw said. “Since last football season, I started to eat more, bigger dinners, lots of steaks. I worked out all the time. Even when we weren’t able to lift at the school, I worked out with teammates.”

After concluding an injury-plagued 2019 season with a defenseless 51-21 loss to South Iredell, Carson didn’t play another official football game for 15 months.

Bradshaw became a different person in those 15 months. Now he weighs a solid 200. He’s still not a huge linebacker, but now he’s got a fighting chance.

Carson made the short trip to rival South Rowan on Saturday. South obviously had done film study. The Raiders were aware that the Cougar to avoid was defensive end Andrew Rollins, who was quick and tough in 2019 and has gotten a lot bigger.

So the Raiders game-planned to run away from Rollins’ side. That meant they were coming at Bradshaw a lot. As an outside linebacker, he was usually lined up across from South’s tight end.

“Definitely, you could see they were running away from Andrew on almost every play,” Bradshaw said. “So I had a lot of chances to make tackles.”

He made 12 of them. Four were stops for loss. He had two sacks and a quarterback hurry.

“It was a tough call as far as who our best guy was on Saturday,” Crosby said. “I’m happy to say that none of our guys stood out in a bad way. (Linebacker) Austin Cook made 16 tackles, but Aaron made a lot of impact plays.  We weren’t physical in many spots last year, but we like to believe that’s changed. Aaron was physical.”

One of Bradshaw’s sacks was for 20 yards after a snap sailed over the head of South QB Nathan Chrismon.

“Chrismon was the guy our defense prepared for,” Bradshaw said. “He’s fast, and we knew we couldn’t let him be running all over the field on us.”

Carson allowed 35 points per game last season and held only one opponent under 20 points, so a shutout was refreshing and confidence-boosting for Carson’s defensive unit.

“It had been a long time since Carson got a shutout,” Bradshaw said. “That mattered to us. It was great to be part of that.”

Carson had never shut out South Rowan and hadn’t shut out any opponent since a 49-0 lockdown of East Rowan in 2010.

The Cougars went 109 games between shutouts.

Mount Pleasant (1-0) visits Carson (1-0) on Friday, and while it’s another non-conference game, this one will tell a lot about the Cougars and how much better they’ve gotten.

“Mount Pleasant is always solid and well-coached,” Crosby said. “So it’s a good measuring stick for us.”

Carson also started 1-0 last season, but then it limped home 2-9 — and took some physical beatings along the way.

The Cougars hope to prove that this is a different season