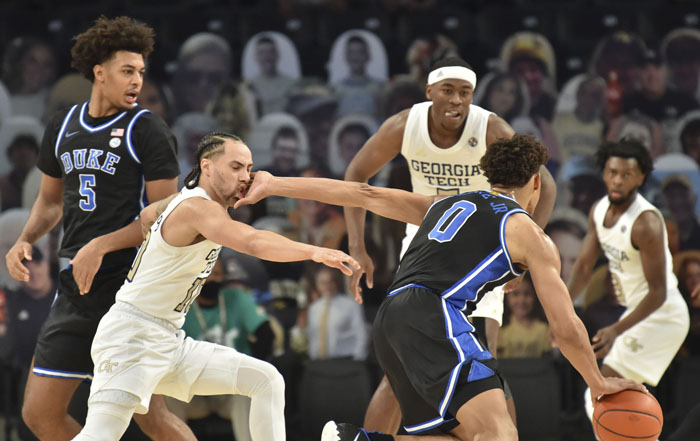 Duke’s Wendell Moore Jr. gets a hand in the face of Georgia Tech’s Jose Alvarado during a drive Tuesday night. Photo courtesy of ACC

ATLANTA (AP) — Moses Wright scored 29 points and grabbed two of his 14 rebounds in the final 35 seconds, and Georgia Tech snapped a 14-game losing streak against Duke with an 81-77 overtime victory on Tuesday night.

Wright split a pair of free throws with 35 and 28 seconds left to extend Georgia Tech’s lead to 77-70. But the Yellow Jackets turned it over twice in the final 15 seconds to keep Duke in it.

DJ Steward made a 3-pointer to make it 79-76 and missed a 3 after the second turnover, but Duke got the offensive rebound and Patrick Tape was fouled. Tape made the first with 2.6 seconds left and intentionally missed the second but it didn’t hit the rim. Michael Devoe secured it at the other end with two free throws at 1.8.

Devoe finished with 15 points for the Yellow Jackets. Jordan Usher added 14 points and Jose Alvarado 10. Wright and Alvarado each scored six points in the extra period. Wright posted a double-double for the fourth straight game and seventh time this season. Six of his double-doubles have come in ACC games.

Wendell Moore Jr. and Mark Williams scored 20 points apiece to lead Duke (11-10, 9-8), which lost to Louisville 80-73 on Saturday to end a four-game win streak. Matthew Hurt, who scored 37 points against the Cardinals, fouled out with 6:14 to play in regulation and finished with 12 points.

Duke scored the last eight points in regulation to tie it at 64 with 1:43 remaining. On its final possession, Jordan Goldwire took an inbounds pass with 6.1 seconds left, dribbled down the left side and found a wide open Jaemyn Brakefield in the corner but his 3-pointer was off the mark.

Georgia Tech plays at Wake Forest on Friday and Duke is at rival North Carolina on Saturday to end the regular season.