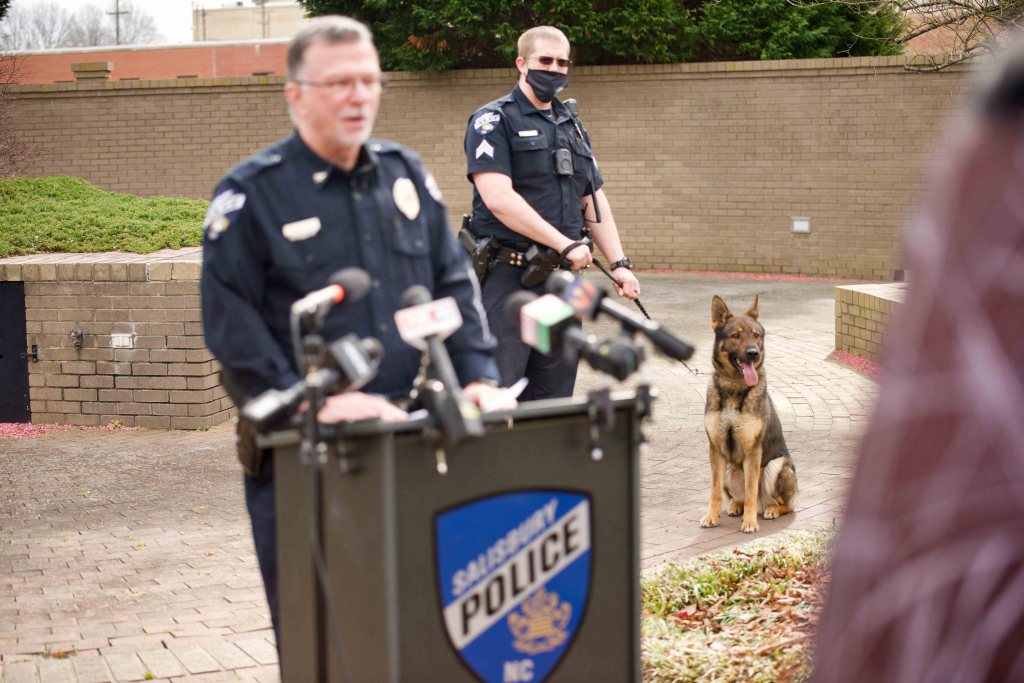 Carl Blankenship/Salisbury Post - The K-9 from the video, Zuul, at the press conference on Tuesday. Salisbury Police Chief Jerry Stokes said the dog is healthy.

SALISBURY — Police Chief Jerry Stokes on Tuesday delivered a brief statement about an incident involving a K-9 and a police officer and didn’t take any questions from reporters.

Stokes said the video involved a “K-9 training” and that the officer involved has been “administratively separated” from the K-9.

The original video was published by Charlotte TV station FOX 46 and then removed from its website. A remnant of the article visible through Google search says an officer was shown hitting and pulling the dog up by the leash.

Stokes said the incident is being investigated by an outside agency that is “reviewing the matter” with K-9 handling experts, including former handlers from other police departments, an owner of a K-9 training firm and SPD K-9 staff.

Stokes also said no taser was used on the dog.

“It is important to understand that police K-9s are trained to use force against criminal suspects and the handler must ensure that they have complete control over the dog at all times so that any use of the K-9 in the field is appropriate and lawful,” Stokes said. “When a K-9 is noncompliant with the handler’s commands, the handler is trained to correct the dog. K-9 training tactics and corrective measures can sometimes be alarming when provided out of context.”

Stokes asked the public to allow the department’s review to finish before forming conclusions.

The dog in question, Zuul, was brought out during the press conference. He appeared alert and smelled plants as he walked past. Stokes said the dog would be in service in the near future.

SPD has five K-9s and five handlers. The department did furnish a copy of its K-9 policies to the Post, but declined to answer most questions about the nature of and response to the incident, citing North Carolina personnel records law.