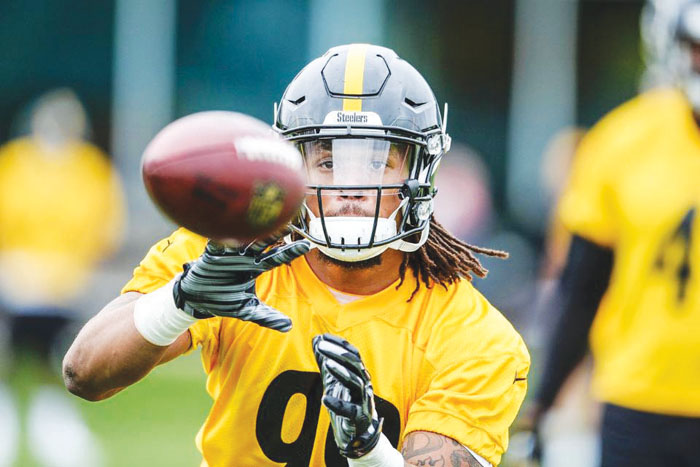 Steelers.com photo Keion Adams (99) goes through drills at the Pittsburgh Steelers' rookie mini camp on May 12, 2017. Adams is from Salisbury and played college football at Western Michigan.

ATLANTA — Keion Adams, who earned a degree in criminal justice and graduated from Western Michigan University, was mulling over job opportunities in the working world when the phone rang.

“Call came out of nowhere,” Adams said. “It’s my agent. He wants to know if I want to sign a contract.”

It took that a little while to register. “Do what?” Adams recalled.

“A contract,” his agent repeated. “Do you want to play football?”

Playing football is what Adams has done most of his life, and the 25-year-old has been on the jagged edges of being an NFL player twice. He was up for it. He didn’t really even care where. Just get him a plane ticket.

“The chance to get back to football, it didn’t really matter if I was going to Hawaii or Russia,” Adams said.

His next destination isn’t as far as those places, but it’s still more than 2,000 miles from home for the former Salisbury High star. He has signed with the Saskatchewan Roughriders of the Canadian Football League. The team plays in Regina, the capital of the Canadian province of Saskatchewan. It’s located above North Dakota and Montana on a map of the world.

The long CFL season is conducted in the friendliest-weather months from mid-June to late October, although those October nights are going to be frosty in cities such as Saskatoon, Regina and Prince Albert.

“Not worried about the weather,” Adams said. “I’ve spent a lot of time in Michigan and Pittsburgh. This is something exciting and new, a chance to see a different part of the world and meet new people. And it’s a chance to play in the second-best football league in the world.”

Injury setbacks kept Adams from playing in the best league in the world. He was close.

He starred at Salisbury a while back and was a big part of the Hornets’ 2010 state champions. He also had his moments in basketball and track and field.

College football was an adventure, as he headed to Kalamazoo, Michigan, to play for Western Michigan. That was different.

He stayed healthy and was a key figure in that program’s unlikely rise to a 13-1 record and being ranked in the top 15 nationally. Adams played in three bowl games. In his last two seasons (2015-16), he totaled 13 sacks. He led the Mid American Conference in tackles for loss as a senior with 18 and made himself an NFL prospect.

He was considered a tweener for the NFL, not massive enough for the defensive line, not experienced enough at linebacker, but the Pittsburgh Steelers picked him in the seventh round.

A serious shoulder injury suffered in a practice drill derailed him in Pittsburgh. He spent a year on injured reserve. After that year, the Steelers waived him. They re-signed him to the practice squad, and then let him go again.

On June 4, 2019, he signed with the New York Giants. He was with them for the preseason games when a calf injury sidelined him. Then it was back on injured reserve. The Giants cut him that October.

There were a lot of calls to Adams’ agent as teams started preparing for the 2020 season. The Rams, the Bills, the Titans and some more. But then COVID came along and tryout opportunities dried up quickly.

But Adams has never stopped working out and staying ready just in case the call came.

“I can always push myself to work out and I work out continuously in Atlanta,” Adams said. “As long as there was any chance at all to get back on the field and compete, I was going to keep doing everything that I could.”

Adams isn’t entirely sure what led to that call, but a fellow named Ben Olson is the new defensive line coach for Saskatchewan. Olson used to be on the coaching staff at Bowling Green, one of Western Michigan’s rivals in the MAC. So, he’s seen Adams in action.

“Even during the NFL draft, I was getting a lot of calls from the CFL, teams wanting to sign me if I didn’t get taken in the NFL draft,” Adams said. “I’ve been watching CFL film since I signed in December — mostly games that my Salisbury teammate, Romar Morris, played in for Calgary. It’s wide open in the CFL, with three downs, the wider field and an extra player. It’s mostly a passing league, so they need pass-rushers. That’s my strength. That’s what I was born to do. I think my ceiling as a rush end is unlimited in the CFL.”

Adams also has the wheels to drop into coverage, which is why he’s always been an intriguing commodity for coaches and scouts.

In February, many of the stars from a golden era of local football got together for former West Rowan star Chris Smith’s birthday. KP Parks, Javon Hargrave, and so on. Adams was part of the celebration. Next time they get together, Adams may have tales to tell about piling up sacks in western Canada.

“I know my criminal justice degree is going to give me a chance to do good things in this world,” Adams said. “But I can’t turn down a chance to play football. I can’t wait to get back to doing what I love most.”