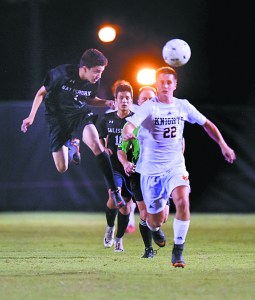 Salisbury jumped on the board first when Dennis Anaya found Brayan Avilez just four minutes into the match.

Ledford tied the contest with a penalty kick for a 1-all tie at the half.

Ledford took the lead midway through the second half on a corner kick that capped a flurry of opportunities for the defending CCC champions.

The score remained 2-1 for 15 minutes until Colin Donaldson fed Anaya, who blasted home the leveling goal with just under five minutes remaining in regulation.

Anaya went to work again just three minutes into the first overtime period when he received a ball from Avilez, beat a defender, and secured the brace.

The Panthers spent the final 16 minutes pounding the Hornets’ goal and finally tied the match with just over four minutes remaining to provide the final score.

“It was a fantastic match to be a part of, in almost every regard,” Salisbury head coach Matt Parrish said.  “We didn’t get the perfect result, but we proved to the teams in the CCC and most importantly to ourselves that we can compete with anyone. I was very proud of our resolve throughout the match. We never cowered, never accepted defeat, and never stopped working.”

Several Hornets had their best matches of the season.

“Dennis Anaya was fantastic and his work extended far beyond the scoresheet,” Parrish said.

“Seelal is an absolute monster and is one of the best players I’ve seen in a long time,” Parrish said.

Next up for the Hornets is another pivotal matchup vs East Davidson Wednesday night at Ludwig Stadium. Game time is 5:30 p.m.